Florence, aside from Rome, is possibly one of the most bustling cities in Italy. It’s not ideal then, the drive right into the city and spend hours fighting for a parking space. As such, my dear husband did some research and found a park and ride carpark where we could leave the car a little way our from Florence, and catch the public bus right into the heart of the city.

We had scanned the weather forecast the night before and found that the storm we’d shrug off had moved over to all our surrounding areas, less threatening but hell-bent on bringing rain all around. So we decided that we’d spend the day in Florence where we’d at least be able to hide under buildings in case it started to pour, leaving Cinque Terre for the day after.

As you may be able to see, I’m a big fan of Italy’s markets. Or markets anywhere around the world. I enjoy looking around to see what unique items they sell and to feel the hive of activity buzzing around the market. This one in Florence leans onto the touristy side with quite a few stalls selling truffle everything, others selling varieties of dried pasta including the naughty penis ones, although there were also fresh meat stalls and fresh spice stalls as well. 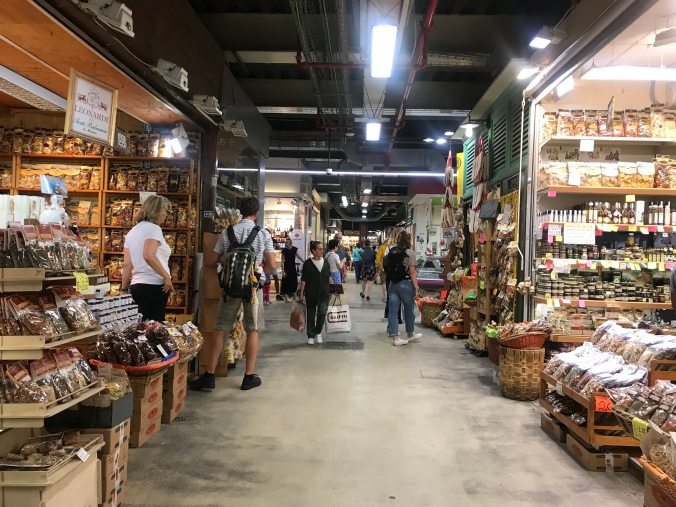 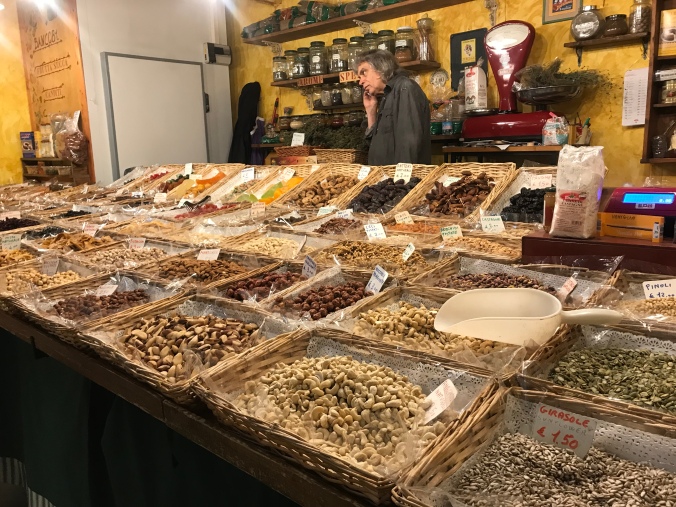 There was a fresh pasta stall that I believe is one of the most popular on the ground floor, with a long queue of people patiently awaiting their turn at choosing their fresh pasta and having it cooked with a sauce of their choice.

We also chanced upon the big stall selling porchetta sandwiches but we gave it a miss and instead, went upstairs to the food hall instead.

I wasn’t feeling like much and in the end, settled on a seafood salad largely made up of pulpo ie octopus. It wasn’t the most lovingly made and it was already prepared to be plopped on my tray after ordering. I’d wanted to go for grilled seafood kebab but it included swordfish which I couldn’t eat so I passed on that.

Flo decided to dive into the Meatball Trapizzino which was essentially a very handy, easy-to-consume-while-you-walk pizza. The pocket was made of pizza bread and you could stuff it with your choice of filling.

Don’t be fooled. It doesn’t look very big but it was quite filling. Served hot and toasty, I think Flo made the better choice.

Back out, it had started to rain which was a bummer.

Thankfully, we were armed with an umbrella under which we huddled while walking around Florence. The Cattedrale di Santa Maria del Fiore was as lovely as its name suggests. 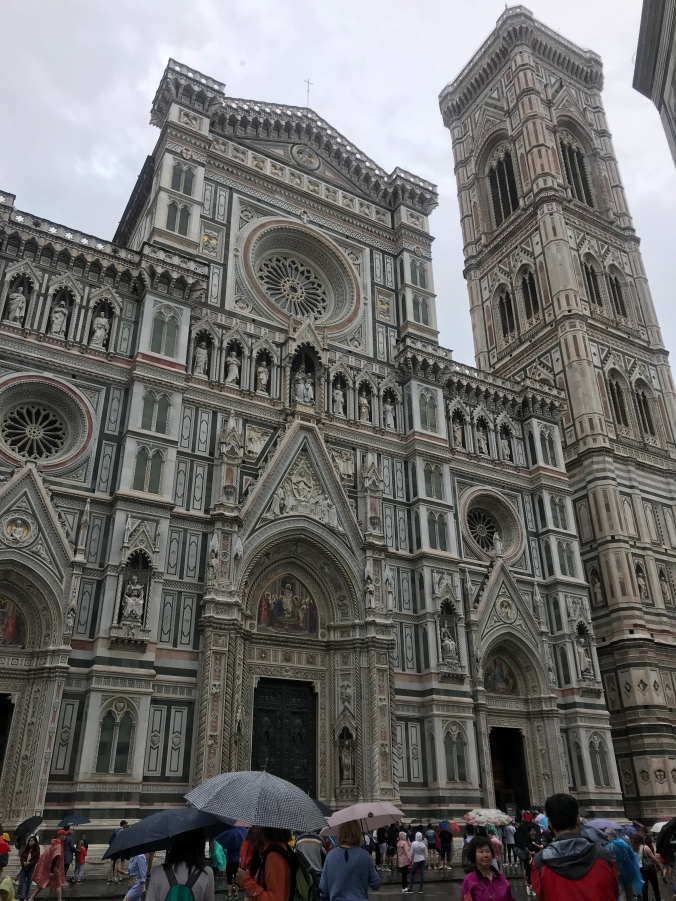 With the wet weather, it was also nice to walk around some of the quieter alleys without being slowed down by hoards of visitors. Florence to me, was quite interesting in that some streets looked more for everyday folk and then you turn a corner and you’re right where all the upmarket branded shops are.

Flo and I made a mid-afternoon stop at Procacci. It is known to have once supplied the royals with everything truffle related. The second we stepped inside, the whole vibe of the place made me shrink back. It felt wholly pretentious with its small area filled with customers sipping on wines and champagne, downing one truffle delicacy after another, looking as those there was a string holding their noses up. (Side note: This is merely my opinion from our short visit there and I don’t believe everyone who goes to Procacci are like that… Or are they?)

I felt uncomfortable in there, because service as well had a hint of snot. Buuuuut… Flo and I still shared a small soft bun spread with some truffle something. It was about the length of one finger and the width of two, lasted a couple of bites and cost all of 2 Euros.

We also bought a bottle of Truffle Butter home for Zen… which was really the reason why we went to Procacci in the first place. We wanted to get him something food related because we know he’s a foodie (all our friends are actually), and we wanted to get something that had thought put into it and wasn’t just bought off a random shelf in a random place.

Flo was also very sure that we go in search for the Statue of the Boar with the Golden Snout. He said I had to rub it in order to get good luck. Rub-a-dub-dub I did.

Next place to tick off was to see the Statue of David in Palazzo Vecchio. I know I know, this was just the replica but it was still magnificent to look at.

We continued on past Ponte Vecchio, the old bridge famous for its shops that are built into the sides of it. I was too tired at this point to walk to the bridge, so we settled on appreciating it from afar.

Then onwards we went to Piazzale Michelangelo. I wasn’t really up for walking all the way up to the viewing point but I know hubs wanted to go up and I didn’t want to rain on his parade. So we took it nice and slow, a step at a time…

With the rain really putting a damper on my mood…

But we finally reached the top. The view was wonderful in spite of the fog that had settled lightly over Florence so it wasn’t as clear as it could have been. Still, a nice reward for the leg work done.

We weren’t up too long before it started to rain harder, signalling that it was time we made our way down.

Back to the city centre, just outside Uffizi Gallery I believe, Flo and I hopped around the different zodiac signs on the pavement. They looked really cool. 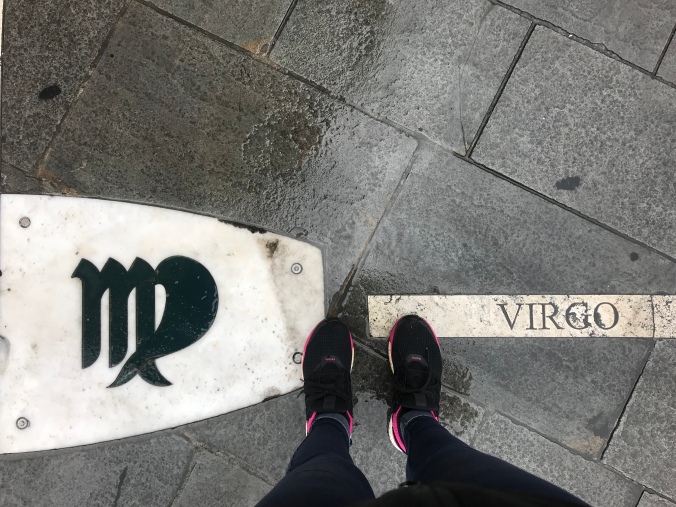 We walked through the Courtyard of the Galleria dell’Accademia before weaving through the market hawking leather goods. We’d arrived back at Centrale Mercato, and decided to have a sit in front of the now-closed, sleeping building, with our umbrella once again shielding us from the rain.

Our dinner location, Trattoria Za’ Za’, was mere minutes away, and upon realising that it was already opened, decided to not wait for our reservation time of 7pm, and arrived there at 6.30pm instead where they promptly received us.

This place was recommended by a friend of mine. I had hopes it would be quite filled with locals but there were a lot of tourists dining there.

Flo and I shared a Bruschetta Florentine Style which comprised of sliced Florentine Bread with Tomato, Basil and Olive Oil. Simple and good.

With the rain carrying on outside, I wanted something hot and quickly dove in for the Mixed Vegetables Tuscan Soup, apparently a recipe from Grandmama.

Flo had a perfectly done Beef Entrecôte with Balsamic Vinegar and Rosemary Potatoes. Lovely and rare in the middle. I couldn’t resist a taste and it was really delicious. Too bad there weren’t a lot of parts of it cooked enough so I couldn’t steal a few more pieces of Flo.

It was quite a packed day in Florence and even then, we didn’t get to go further out of it to visit Boboli Gardens or even further to the Vasari Corridor. I suppose we will simply have to leave them for our next visit to Italy.

When we arrived back at the Park and Ride carpark, we were treated to the remnants of a beautiful, fiery red sunset. Red sky at night, sailor’s delight? Hopefully! Because we were praying for good weather for Cinque Terre. 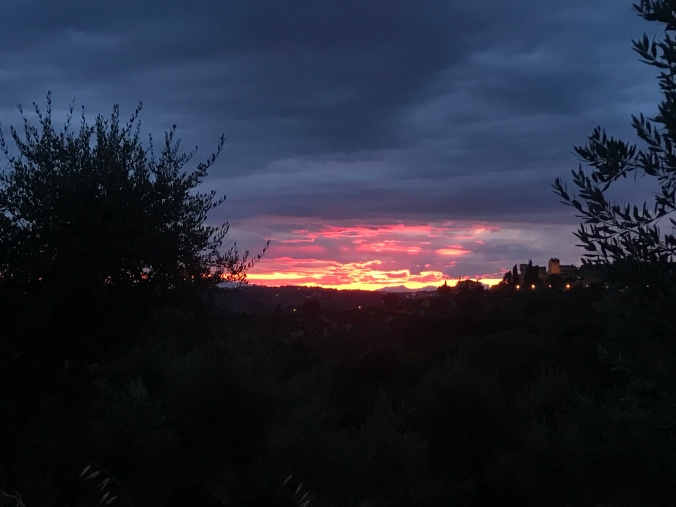