Our month away from home commenced on 28th June. We had our 15th week scan for the babies just before leaving and assured that all three were thriving, off we went to Zurich, Switzerland via London.

Flo used to live and work here, so he was excited to show me around. Only, he had to work the week we were there so aside from the weekend, I did most of the wandering around alone. Thankfully, the weather was pretty good and Zurich city is small enough to get around by foot – I refused to pay for public transport because it’s crazy expensive there.

We landed around noon and quickly picked up some Laugen Pretzel to fill our tums.

We were putting up at Yannik and Nadya’s home for the weekend before we moved to our hotel, so we quickly made our way there to drop our luggage off. Thereafter, we hopped on a few trains to Uetliberg – a lookout point.

Initially, we were meant to go there to meet Flo’s dad, Samir, and his twin half-siblings. Apparently there was a change of plans. The message didn’t reach us though, until we were up at the top and Flo managed to latch on to some wifi, so while Samir and the kids were lapping up the sun by Zurich lake, Flo and I were up high taking in the picturesque view of Zurich. 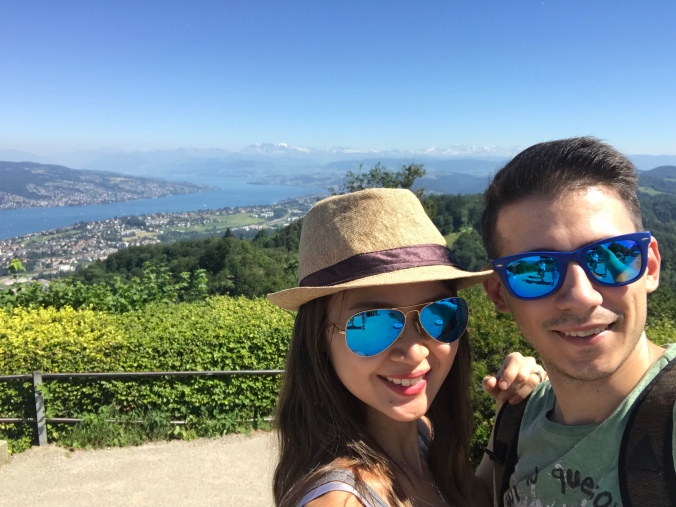 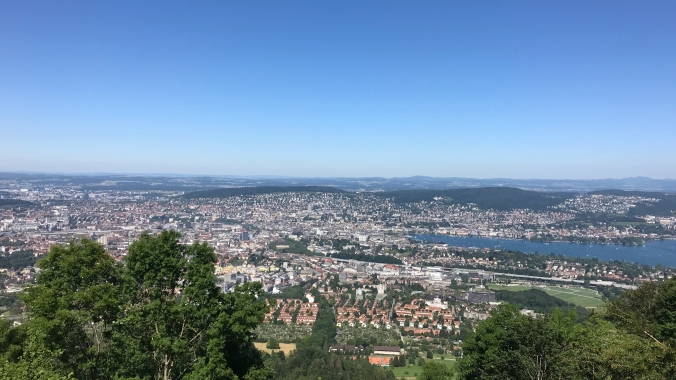 Once we returned back to the main city centre, Flo showed me a few landmarks for the week ahead. The Central Station…

The supermarkets… where they actually sell Cannabis infused drinks.

We returned back to Yannik’s in time for dinner and were treated to some BBQ meats and vegetables.

Next day, Yannik drove us all out of Zurich, so that we could visit Mt Riggi. 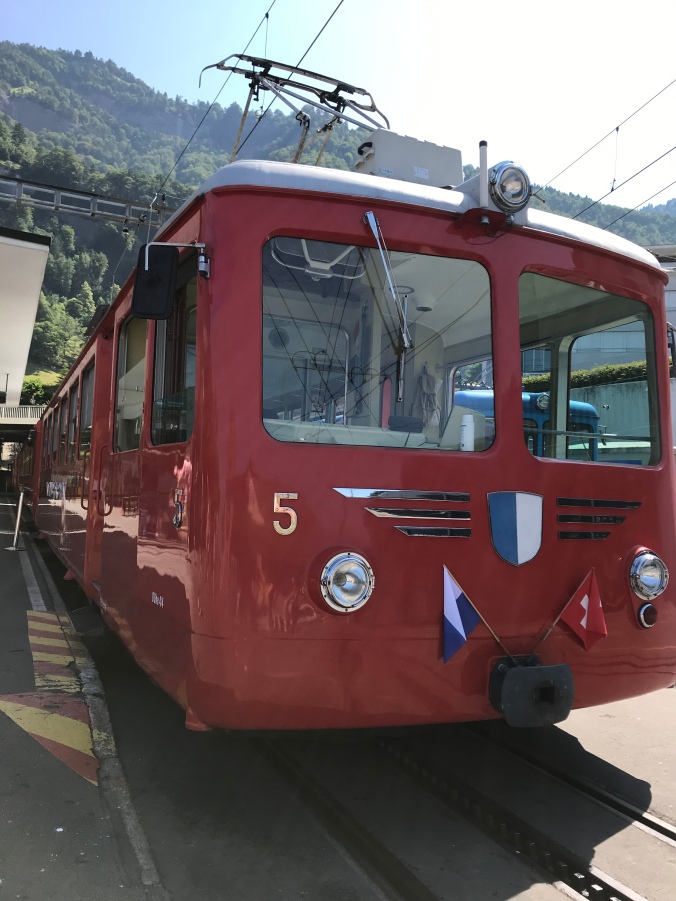 You have the option of hiking up, or taking the old, traditional trams. With me being pregnant, we didn’t give it much thought and decided straight on the latter. It was a very painful decision in the end with it costing CHF64 per person!

It took us about 20min to get to Rigi Staffel where we had a bit of a bite to eat and soaked in the late morning sun. 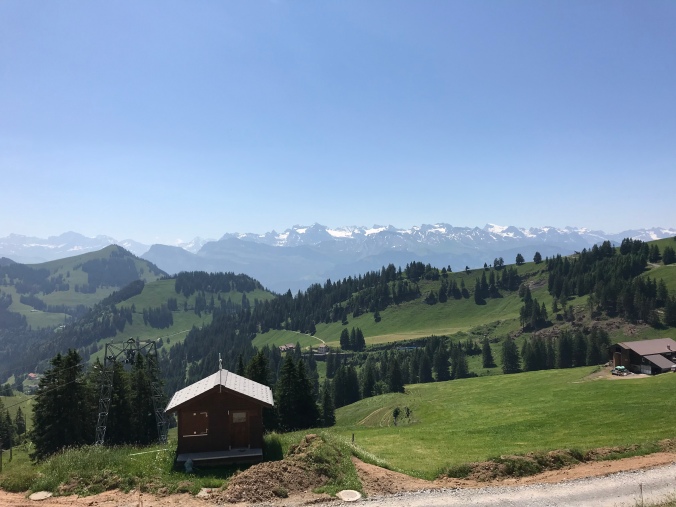 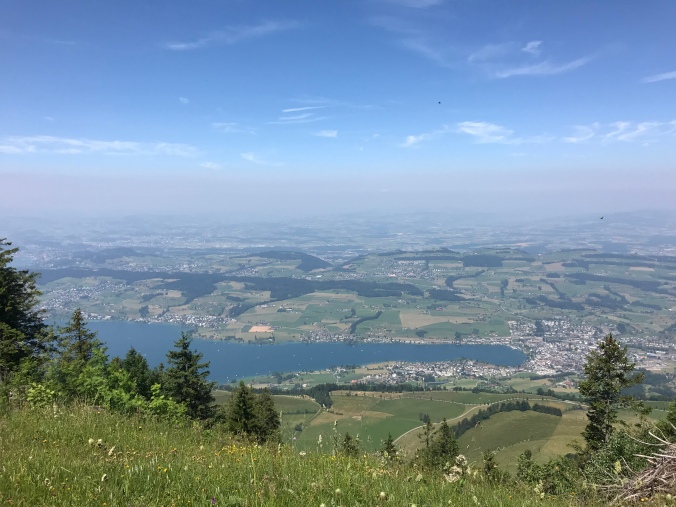 We decided to take a hike down towards the mid-way station where we took the tram back down the the bottom. It was a really nice hike, with it ending just as the sun’s rays began intensifying.

Once down, we scrapped the plan to walk towards a spot where we could go for a dip into the lake within the area because 1. A lot of places may already be full, 2. The nearest place may be a few kilometres way, 3. Temperature had crept up to about 36, 37 degrees Celsius. Instead, Nadya managed to find a hotel across from where we’d parked, that would allow us private access to the lake if we purchased something from their restaurant. We all got ourselves a drink before hopping over to the lake… which turned out to be freezing! Yannik, Nadya and Flo were happy to paddle around in the cold waters, while meek me put my toes in and froze. I ended up cooling down by rubbing the water on my arms and belly, before retiring to the grass and resting.

In the evening, we were blessed to have Yannik and Nadya drive us to our hotel. It was meant to be a 15min ride but it turned out to be 45min long with all the blocked roads and detours in the city centre. We reached our hotel eventually and after we checked in, Flo and I went for a short walk towards Zeughauskeller for dinner. 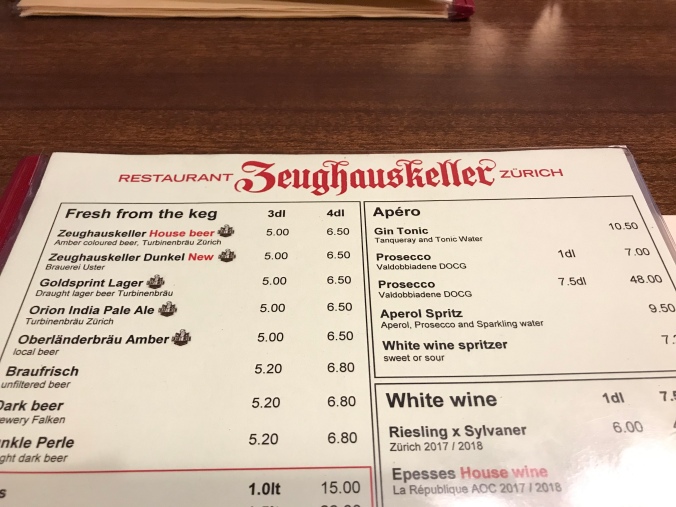 It looks like an old pub but was actually formerly an armoury where weapons were stored back in the day. Flo and I shared a portion of Zürcher Geschnetzeltes – pan-fried sliced veal with mushrooms in a delicious creamy, white wine sauce, served with Rösti.

It was a generous portion. I enjoyed the buttery, crisp on the outside, fluffy on the inside Rösti. The veal was a little on the salty side (which I found to be more the norm around Switzerland, and later, in Italy), but rich and delicious.

We also ordered Aelplermagronen, an Alpine Macaroni and Cheese, with onions and potato cubes in a cream sauce.

This, I can imagine eating in winter when it’s cold and you need the extra weight to keep warm. It was less heavy than the American Mac&Cheese, but still cloying after a while.

We also shared a plate of veggies, well, I had most of it really, because pregnancy makes going for #2 a bit of a chore so…

This pretty much sums up our weekend in Zurich. I’ll be blogging more over the next couple weeks on my time exploring the city alone, our short stopover in Hamburg, and then our big holiday in Italy! X

There was an error retrieving images from Instagram. An attempt will be remade in a few minutes.