This was possibly our second coldest day throughout our New Zealand trip and after a hot coffee, we went for a 3-hour return trek along the Kepler Track, from the control gate to Bord’s Bay. It was one of my favourite tracks this trip – not that we went to very many.

It took ages for my hands and feet to warm up even as we set a comfortably quicker-than-usual pace for ourselves but by the time we reached Bord’s Bay for a quick bite and drink, we were a lot more comfortable. And by the time we returned from our walk, I’d pretty much stripped down to my first layer of clothing.

What I loved about this track was that it was pretty straightforward. The ground was quite level and perfect for a nice family stroll. More than that, I loved the whimsical, fairytale-like ambience of the forest, which was filled with lots of pretty flora. 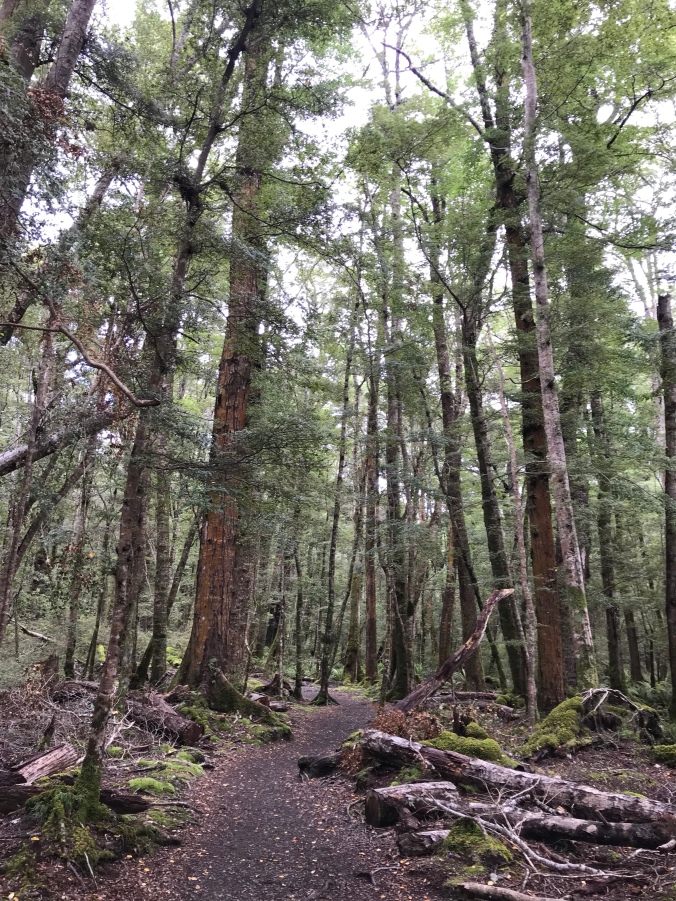 There were tall trees lined along the path, lots of green carpet moss, little nooks here and there for the fairies to hide, narrow creeks weaving themselves here and there. There were a whole lot of bright red toadstools everywhere too!

The kind that look so pretty and tempting, definitely put there by the wicked witch of the forest to lure innocent elves towards in order to catch them.

There were even black mushrooms dripping with poison, too deadly to even touch. I might be exaggerating just there. But seriously, there were so many different species of fungi growing everywhere.

And gorgeous ferns! Even nature has its gold!

Once we reached Bord’s Bay, we had an unblocked view of Lake Te Anau. A short while after taking this picture below, the clouds parted and some sun streamed through making it look much lovelier.

Apparently the forest has lots of kiwis, the birds not the people, but we saw neither head nor tail of a single one.

We got back to the camper van about 5pm before driving back to the town centre and filling our bellies with some dinner. Then we were off towards one of the campsites in between Te Anau and Milford Sound. It was a interesting site set by the lake, but rather than being a flat patch of ground, this was had little ‘bays’ amongst the trees leading to the lake. 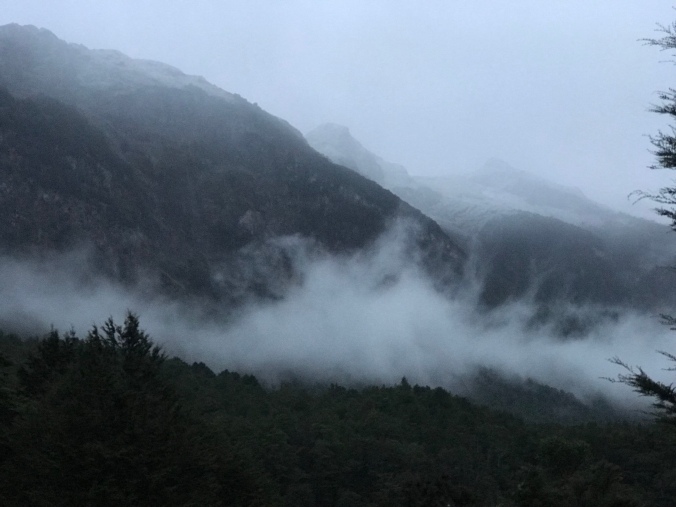 It was quite a miserable kind of evening. We found ourselves a small bay for our van to huddle into but it was the coldest night for us both. The rain pitter-pattered throughout the night and even with our multiple layers of clothing and socks, and even with the extra wool blanket, the cold managed to sneak through. It was a tough night for me as I struggled to find warmth and it was depressing (using that term loosely here) to look out the window repeatedly only to see that it was still dark.

But eventually, dark gave way to light and because it was so cold, Flo made the smart decision to drive out to seek the sun in order for us to thaw enough to make, and eat, breakfast. 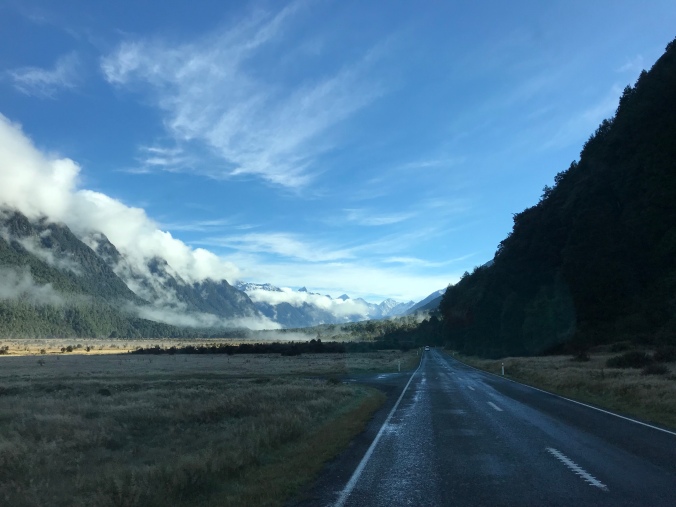 The early drive out allowed for us to see the fruit born of the cold blast. There were glaciers formed between snow-capped mountain after mountain after all that heavy rain, wispy puffs of clouds hung low and fields of gold stretched out beneath the morning sun.

To say it was glorious would be an understatement. It amazed me how breathtakingly beautiful, how perfect, God’s creations looked. Photos do little justice to nature’s beauty. Yes, I was cold to the bone, but even in my misery, I could only gaze out in wonder at all the magnificence laid before me.

We stayed in this spot a while before I made a nice hot breakfast of smashed avocados with an egg on toast. Flo did the smashing. He’s awesome at that. Then, reluctantly, we left this spot and made a quick visit to the Mirror Lakes.

They were much smaller than I thought they would be. After the sheer vastness of Lake Te Anau, and Lake Brunner, these were really just ponds. But in the stillness of the water was a clear reflection of all things above.

Once the chill of the morning got to us, we were back in our camper van and on our way. We stopped quickly at one of the lookouts before we drove further and upon Flo’s call, stopped at a random bay just to ogle at the gorgeous scenery.

After a minute or so, we heard this strange scratching and my first thought was that it was another car pulling up behind us or that a branch had fallen onto our roof. After a bit more noise, Flo decided to get out and have a look, hoping it might be a kea since there was a sign at the lookout that said not to feed the keas. I, on the other hand, thought it was too cold for these native parrots to want to be out and about.

Turns out, my dear fiancé was right. The second he looked up onto the roof of our car, his face turned to surprise and he went “OMG baby come out and have a look! It’s a kea!”. I thought he was kidding but I got out anyway. 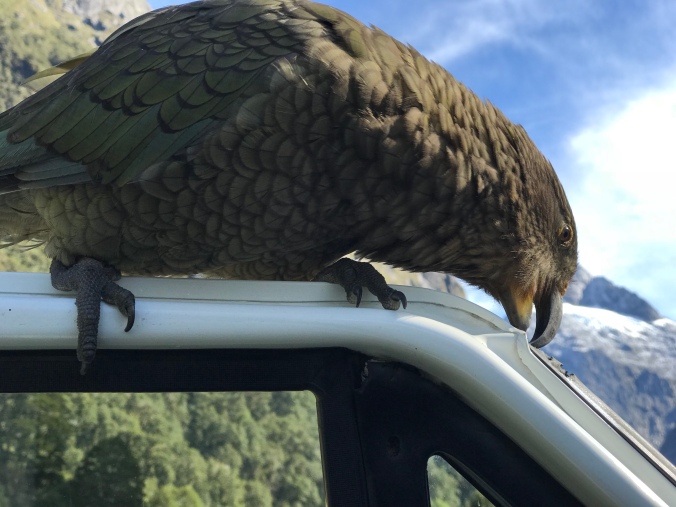 And there it was! A cheeky kea tap dancing on our rooftop before hopping off onto the rim of my opened door.

It happily posed for us while snacking on the rubber insulation of the car door. It was quite a big bird, but so lovable with its air of mischievousness. We were actually quite sad leaving it once we’d managed to get it down from the door. When we left, I turned to see the poor little fella being hounded by a group of tourists from a bus that had just parked behind us. I hope it managed to fly from them unharmed. Seeing this gorgeous kea was a big highlight for me and it felt like such good luck having this feathered friend choose us to share some of its morning with.

As we drove on, the skies cleared and once again, we were bathed in sunlight.

To get to Milford Sound, we had to go through this single lane tunnel that bored through a mountain.

From there, it didn’t take us too long to reach the sounds. There are a lot of cruises going out at different times throughout the day beginning from early morning to mid afternoon. The most popular timing is around 1pm because that’s when the tour buses come in with their hoards of people. Flo and I booked ours online (for cheaper) for 3.10pm when prices were more competitive and there were fewer people.

Milford itself is quite a basic place, mainly serving the crowds going to see the Sound. There was only a single tourist centre with a cafe so we sat there a while and had a drink before we went back to the van for lunch. Then all we had to do was walk over to the cruise centre, collect our tickets from the Jucy counter, and relax until it was time to board.

Due to the rains from the previous days, there were lots of mini waterfalls along the cliffs.

There were resting fur seals sunbathing on the rocks.

But sadly no penguins, dolphins, or orcas.

There are two permanent waterfalls within Milford Sound – Lady Elizabeth Bowen Falls and Stirling Falls. We had the pleasure of getting up close and personal to the latter.

Ok. Flo got really really up close. I got too cold and decided to sip on hot tea on the second deck while the boat backed up for all those who wanted a nice shower under the spray of the falls. Luckily Flo had his waterproof jacket on so he got the full experience.

We had an enjoyable time at Milford Sound but as mentioned earlier, there’s not too much to do there so after our cruise, we were quickly off and away to Queenstown.

We got to see yet another amazing sunset on the way. And I kid you not, the photos below are entirely unedited!

We ended up at a free campsite about 20min out of Queenstown because the ones in the city cost a pretty penny and we wanted to stay at one of the Holiday Parks there the next evening so we could get washing done and take our hot showers.

Oh! And in case you think we only take showers in holiday parks, therefore only taking showers once every many days, we actually took most of our showers in the camper van. The camper van toilet doubles as a shower and is quite cramped even for someone as petite as I am. We had a hot water heater so we did have access to hot showers but getting to shower at the holiday parks were a real treat for us and we always looked forward to that. So in order to bask in that luxury, we decided to camp at Kawarau Bridge.

We arrived around 10pm and within minutes, were entertained by this spectacular showing of fireworks.

It went on for a good 15min and for what reason? We haven’t a clue! It looked like no one else were interested apart from Flo and I. We sat there hypnotised by the streaks of light flying into the night sky and setting it ablaze.

We didn’t realise until next morning that the bridge we had slept next to was actually where the first bungee started. While it wasn’t a particularly impressive place to jump, and certainly not the highest place to leap off of, it had a sentimental history for bungee junkies i.e. not me. At 9.30am, just as Flo and I opened our eyes to a new day, there was already a queue of people waiting to kickstart their morning with a shot of adrenaline.