Onto the last leg of our Thailand end-of-year holiday, we decided to take Friday easy and spend a day by the pool-side being total bums. 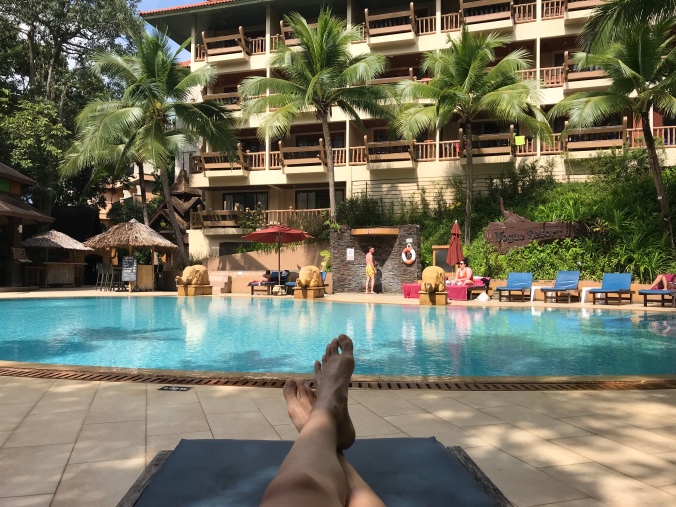 Flo actually bought me this gorgeous bikini before our holiday but I couldn’t bear to wear it into the sea during our 4-island tour so I only used it for the pool. 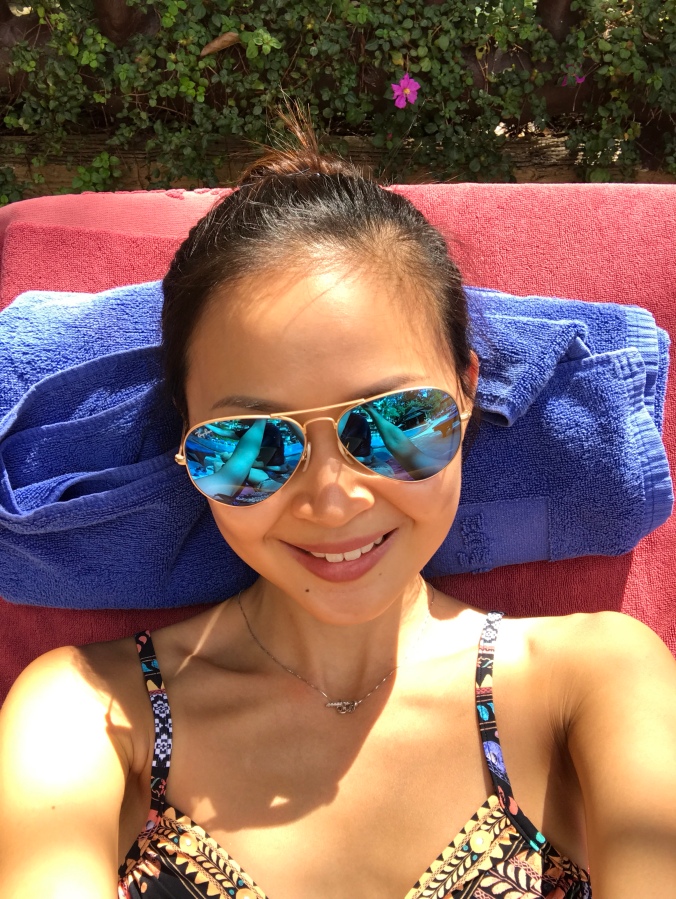 Even then, I didn’t actually go into the pool because it was a bit too cold for my liking. Can you tell how much I love being warm? 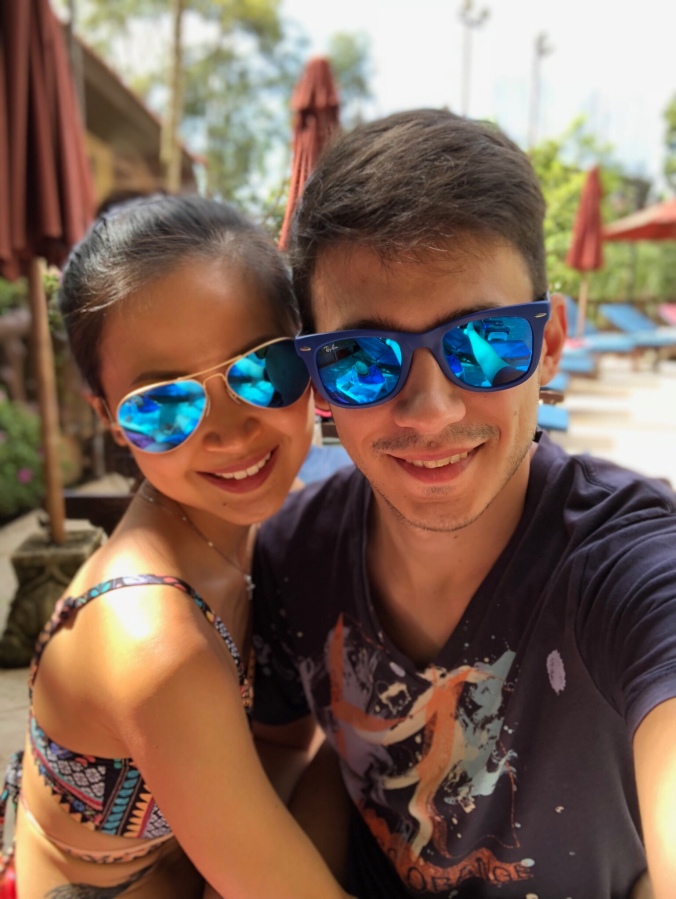 We did get our lazy bums up for lunch though. The night before, while we sat at Boogie Bar listening to some live music, I spotted this Thai restaurant called Potjawan. It looked nothing fancy and I got quite excited at the prospect of it being more wallet-friendly, less tourist, but still delivering on the awesome Thai food.

And that they did!

It looked family-run and food was cooked fresh upon ordering and delivered straight to our table. They weren’t too busy when we arrived for lunch so service was prompt.

We also had Cashew Chicken without chillies which was lapped up with gusto. 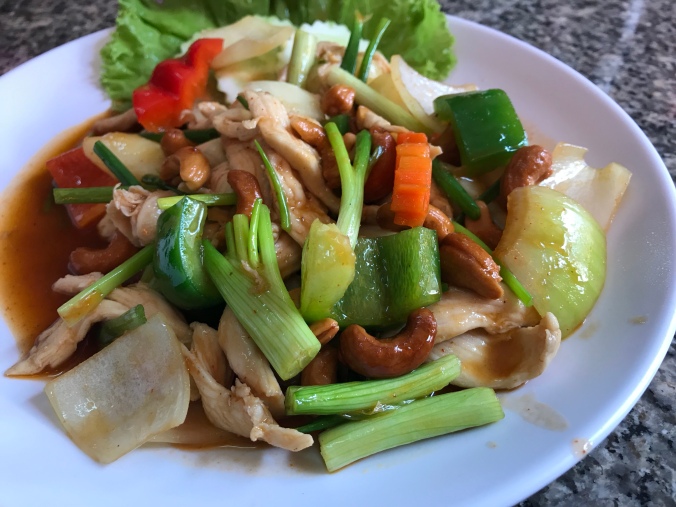 And a serving of Morning Glory stir-fried with Garlic. The large chillies were more for show because usually they look fearsome while lacking the heat of the smaller, bird’s eye chilli, or chilli padi as we know it here.

And because I had the honour of doing the ordering, I added on a plate of Som Tum Talay, Papaya Salad with Seafood. Naima and Martin aren’t quite used to the potent burst of crustacean flavour from the dried shrimp so more for me! But aside from the shrimp, they too really enjoyed this salad. 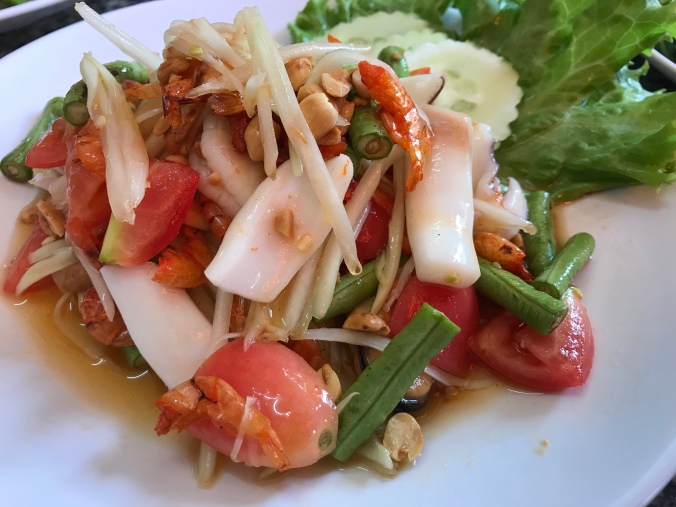 Then it was more lounging around before dinner. This time, we let Naima and Martin choose a restaurant and they went with one that also sold Italian food. It looked a lot more high end compared to where we had lunch but it was good in a way because by this time, I was more or less ‘Thai food’-ed out and needed something different to break the ‘usual’ flavours that we were having at every meal.

So while Naima, Martin and Flo stuck to opting for Thai food, I went with a simple Smoked Salmon Salad which was served with Cream Cheese on Toasted Bread. It was surprisingly better than I expected and left me extremely satisfied.

Thereafter, they decided to finish our meal with Mango Sticky Rice. As you can see, it was plated with flair and considering that I’m not as big a fan of this dessert and the other three, I found myself enjoying this quite a bit.

Some sweet, juicy mango, along with some cold vanilla ice-cream, a touch of crumble, and warm coconut sticky rice and it was a myriad of flavours and textures in the mouth.

With dinner over, Flo and I went for an awesome massage at Sukhothai which is along the main road leading towards the beach. It’s as busy as it looks but honestly, the massage therapist who massaged my feet, and the one who gave Flo a neck and shoulder massage were both very professional and quite exceptional. We both left incredibly relaxed and impressed. If we had more time, we’d have returned another many times for sure.

Next morning, we rented two scooters and the two boys drove us an hour and a half all the way to Emerald Pool further up north.

No food’s allowed inside but they have this big wooden board with pegs right by the entrance where you can leave your snacks/food, to be picked up when you leave.

We were enamoured by the clear waters the second we entered the Emerald Pool compounds. 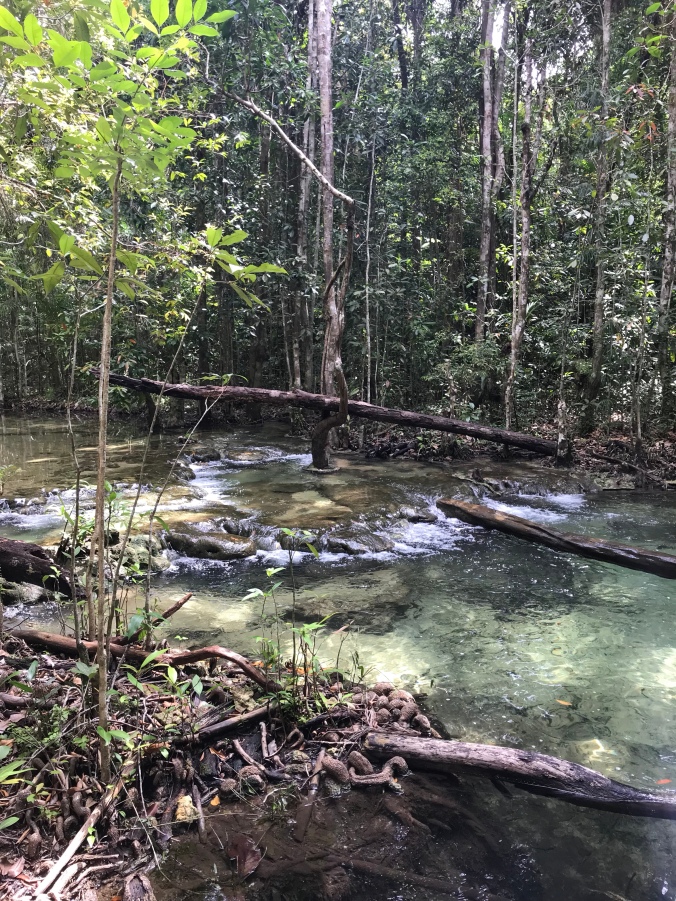 We took the 1.4km board walk towards Emerald Pool where we could gawk at the interesting flora and fauna surrounding us left and right.

As well as catch more glimpses of perfectly clear waters. 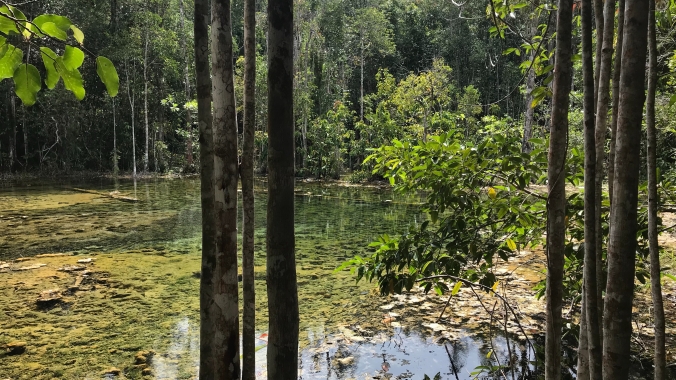 We found ourselves getting quite excited about reaching the Emerald Pool itself and when we finally got there, we were greeted with a large green pool filled with locals and tourists alike. It was very slightly anticlimactic but what the hey! We found a spot to ‘camp’ our belongings and slipped right in along with everybody else.

Or rather, it was more me clinging onto Flo rather than us swimming. It was nice just semi-floating around while observing the people around us as they splashed about and enjoyed themselves with friends and families.

We ended up missing out on walking further up towards the Blue Pool because of growling tummies… Which was just as well because apparently, the Blue Pool is closed from November to April when it’s mating season for the rare Gurney’s Pitta Birds.

Knowing that it’d take too long to get back to Krabi town, let alone Ao Nang, for lunch, we decided to plop down at one of the restaurants out front a short walk from the Emerald Pool entrance – Krurimtarn Restaurant. 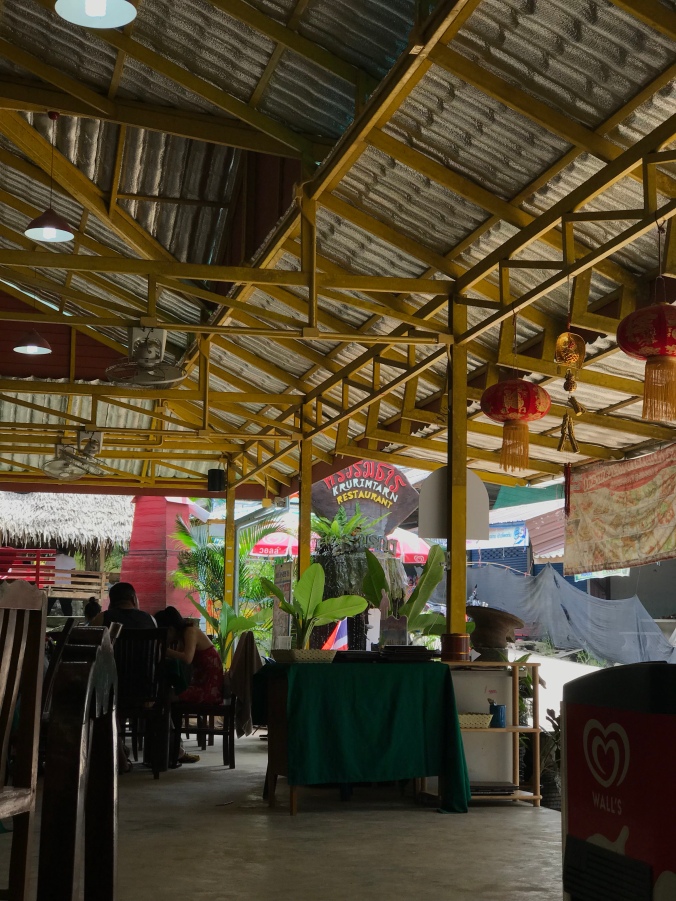 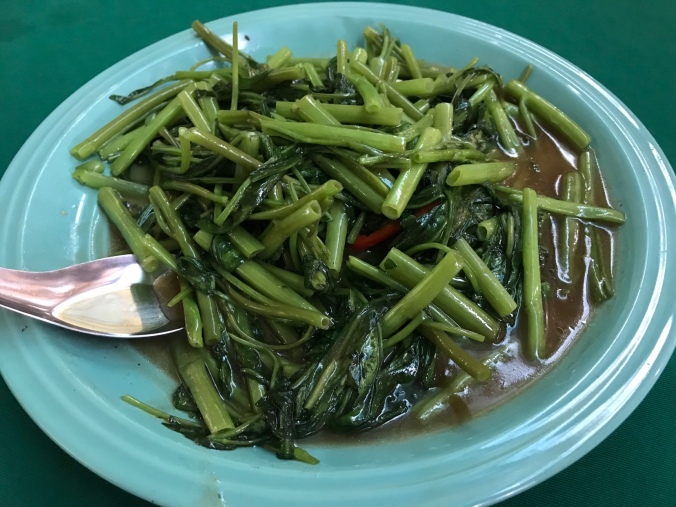 Massaman Curry which tasted better than it looked although I don’t believe this is at all the authentic version. The real deal is usually richer in colour from the range of spices, herbs, chillies and peanuts used to make its paste. 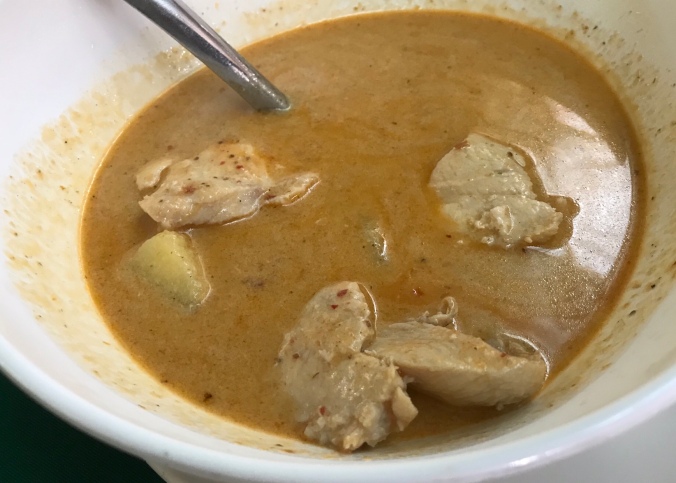 Also, in Asian, cuts of bone-in chicken are usually used for curries because bones boost flavour!

We shared a portion of Seafood Salad too which wasn’t outstanding but not bad either. 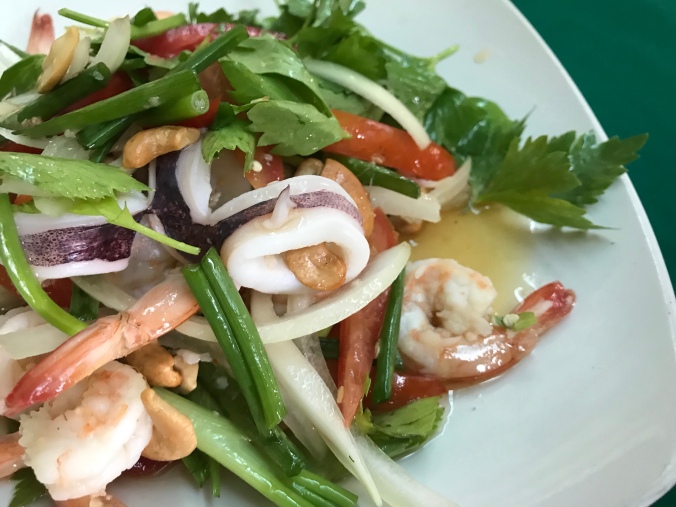 But the dish of the meal would have to be the Omelette.

Simply seasoned with a bit of fish sauce and probably a squeeze of lime, some soy and pepper, this omelette was cooked to a beautiful brown and didn’t need much else to taste as spectacular as it did.

Then we were off back towards Krabi Town. We planned to stop by a small beach en-route but with Time not on our side, we thought to head straight into town instead where we found a small cafe for coffee/tea. Refreshed, we walked towards the left where the park was. Only later as we were driving back to Ao Nang did we actually realise how huge the park was and where we walked was merely a teeny tiny fragment of the entire space!

The weather was perfect. While the grey clouds threatened us with rain, it held back and allowed the winds to take the lead instead, keeping us nice and cool for our visit to the Weekend Night Market where we planned to nosey around for some dinner. 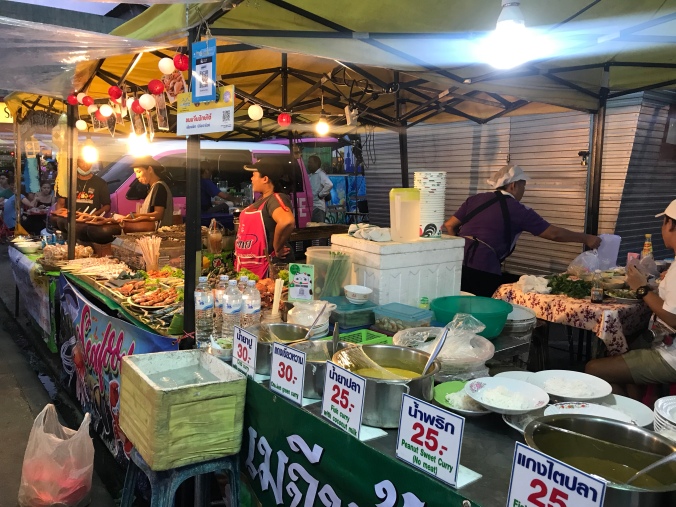 After Thai food galore this trip, I was very tempted to go for Sushi but… Flo convinced me otherwise because first, they’d been sat out for we have no idea how long, and they didn’t look great in quality compared to what we can get back in Singapore. 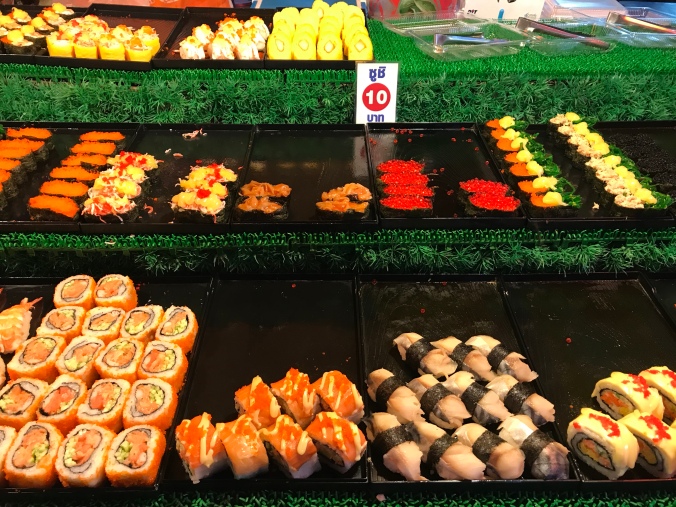 So while he chose something called ‘Khao Yum‘, essentially a Thai rice salad that was a first for both of us and was crazy delicious based on the sample I was allowed to try (lol)… 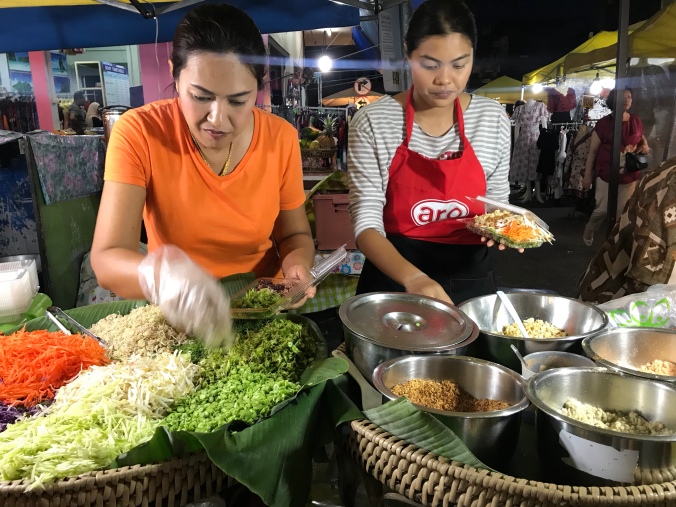 I found my curiosity piqued at this Mushroom Bonanza stall and opted for a portion of Spicy Mushrooms.

Oh my Lord! I’m crazy about mushrooms and this bowl of black wood ear fungus, enoki mushrooms, eryngii mushrooms (king oyster mushrooms), maitake mushrooms, and shimeiji mushrooms made it their life’s mission to create a party in my mouth with the spicy concoction they were bathed it along with some fresh raw onions, mint and basil. Must try to replicate this! 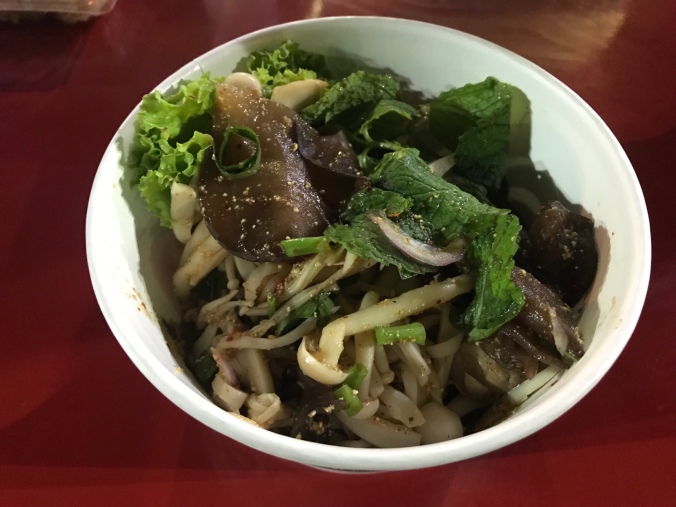 And we all had dinner in front of live-music. It was a simple stage set up but the music was good.

After dinner, we rode back to Ao Nang, returned our scooters and settled ourselves back at Boogie Bar. Tip: If you’re ever in Ao Nang, definitely definitely plant yourself at Boogie Bar for drinks and live music. The musicians are awesome, the band together is even more awesome and very interactive with the crowd, and it’s best to get yourself there before 10pm because it fills up quickly thereafter with few people refusing to leave till very late, or until they fall off their chairs. In fact, the atmosphere there is so good that people are happy to just stand around and listen to the music, or dance along, or even sometimes play along with the band. Good stuff seriously.

Flo and I turned in around midnight while Naima and Martin stayed till 2am? Apparently after Flo and I left, they really upped the ante and the real fun kicked off so don’t miss Boogie Bar!!

And with that, we’ve reached Sunday, our final morning in Ao Nang spent by the poolside before the four of us went for one more lunch together at Potjawan.

This time it was Mango Salad, which is really just a slight rendition from the Papaya Salad… 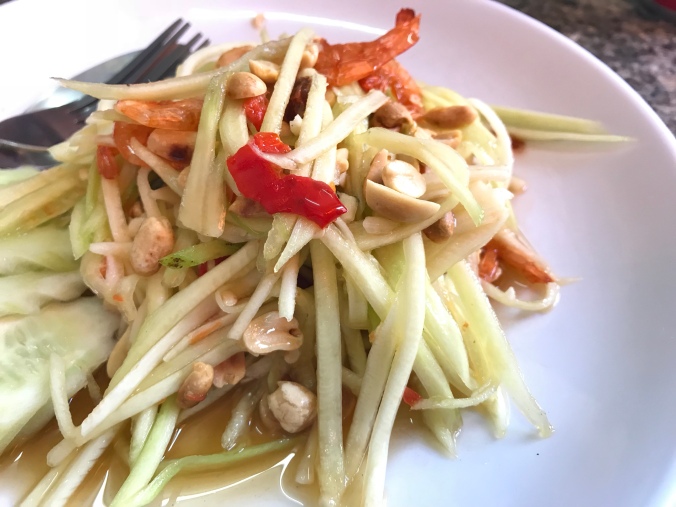 Crab Omelette since we were all in consensus that the omelettes in Thailand are killer! 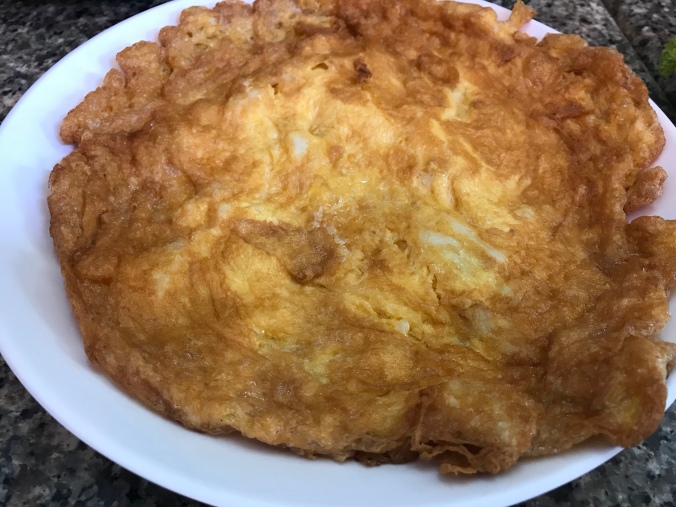 A not-so-spicy Beef Salad. One thing to note is that beef in Thailand is often cooked a little tough. Generally tender cuts are not used and they’re not cooked rare so this is probably not a dish recommended for people who enjoy juicier cuts of beef.

We also shared a portion of Crab Fried Rice, unpictured, since I have a photo of one just further up this post.

After lunch, we managed to spend a short while more together before our taxi arrived to take Flo and I to the airport – Naima and Martin are still on holiday around Thailand until end December. And before I actually close this chapter on our 10-day Thailand holiday, I have to say that our flight back went pretty well until we were nearing Singapore and bad weather forced us to circle around a good 40 minutes while waiting for the weather to clear. When we were finally set to land, the plane took crazy long to descend but the pilot, I have to say, was well in control. Still, my fear of flying/turbulence made me quite anxious the whole time and I think that after my solo travel to Hong Kong a few months back, that fear’s only heightened.

It was a memorable holiday for me travelling with Naima and Martin. It’s nice travelling with people who move at a similar pace to us and are also relaxed and flexible with their schedule. Getting to see Flo interact with his sister enabled me to see how caring and loving a brother he is. And also, it was only upon us reaching home that I realised that what I missed the most from our holiday wasn’t so much being away from home, but being away from Flo after being with him 24/7 over the 10 days, since it was back to work for us both. I guess in a way, Flo has become ‘home’ to me and he’s what I look forward to seeing at the end of each day!