I know I’ve been mentioning quite often about how busy I’ve been and slightly more than a week ago, Les asked if she could refer a customer to me. This customer, G, actually placed an order for quite a number of 6″ Red Velvet Cakes with the then-cake shop I was working at back when she was about to get married. This order was particularly memorable because of the sheer number of red velvet cakes I had to make, and the red fondant ‘Double Happiness‘ symbol I had to laboriously cut out.

This time, her order was for 31 6″ cakes, with three layers of light sponge coloured pastel pink, pastel yellow and pastel pink respectively. I had no idea how I was going to get it all done especially now working from home in a kitchen a fraction of the size I was working in back at the shop. Then there was thought of where I was going to store them to keep them cool. Followed by the worry of how I was going to get all the details done. But I quickly said yes to the order anyway. 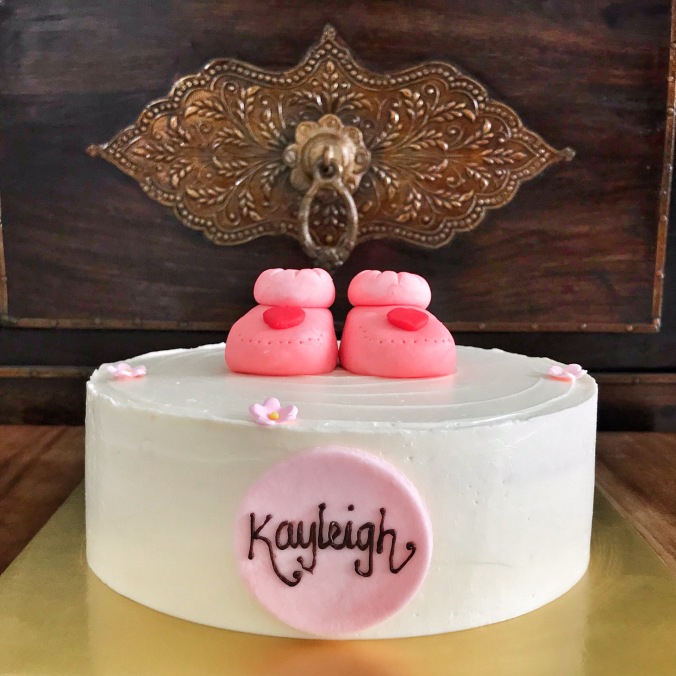 Thankfully, G was happy with a simple and sweet design and we decided that collection would be over three days which worked very well for me. I managed to make 32 pairs of fondant baby booties (1 extra just in case) as well as 32 pcs of round fondant plaques to pipe the name ‘Kayleigh‘ on. I made incredible amounts of Italian Buttercream – I trust Italian buttercream to no end because of how light it is and how stable it is especially in warmer climates like Singapore’s. 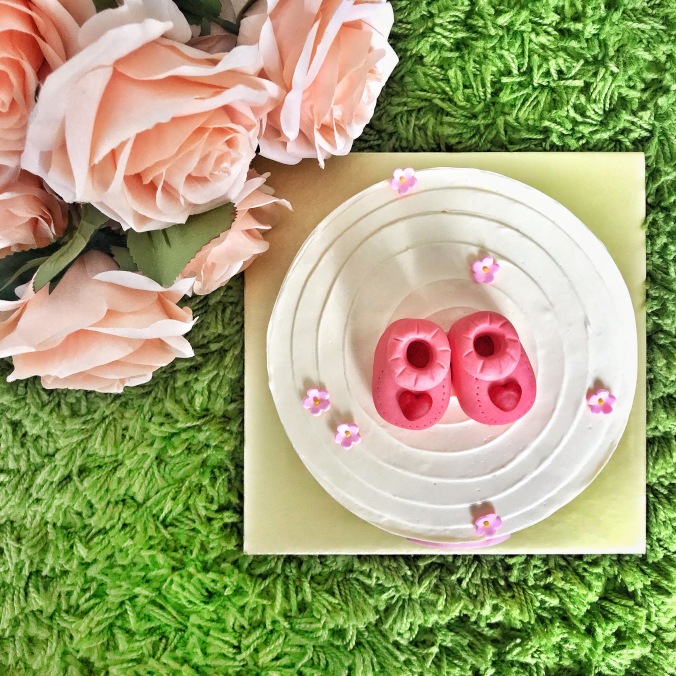 I found myself relishing the challenge once I got a system in order. G’s order stretched me and made me realise just how much MORE I am capable of with the time that I have. This includes satisfying cafe orders on top of these Baby’s 1st Month cakes, as well as rushing to appointments with Adaline and running around the neighbourhood picking up more butter, more eggs, and more butterrrrrrrr! 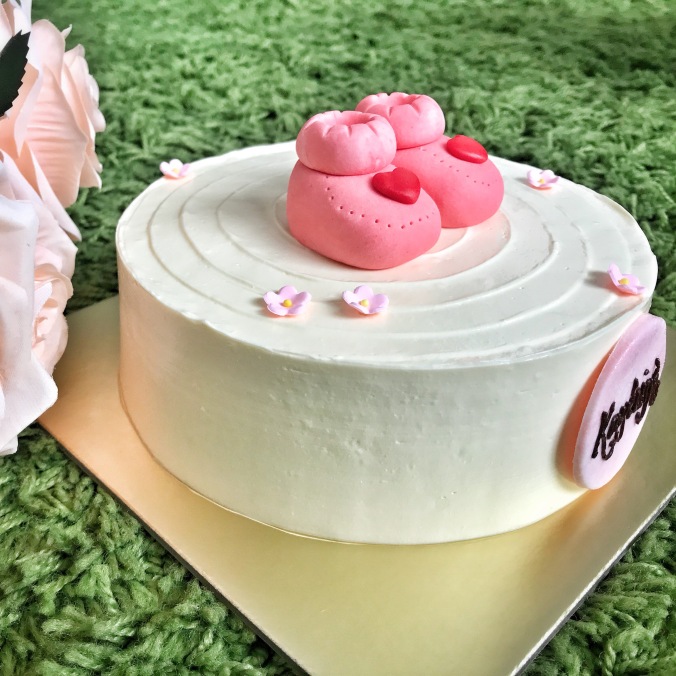 Oh! Some background information: In Asia, when babies turn a month old, it’s known as their Chinese Full Moon Celebration. This coincides with the end of Mummy’s confinement period as well so both mother and baby can be brought out to see friends and family.

Some families may engage the baby in certain rituals and traditions thought to bless them but what is usually not ignored is the gifting of traditional treats to close relatives. Usually it is presented in a small compartmentalised box containing a red egg, ang ku kueh (red tortoise cake), glutinous rice cakes, and small squares of Western cakes. These days, some younger parents choose to take the less conventional option and give small cakes or gift vouchers to their close relatives to celebrate baby’s full month.

Speaking of all things Asian, I made an Asian Glazed Tuna Steak for Flo the other evening. 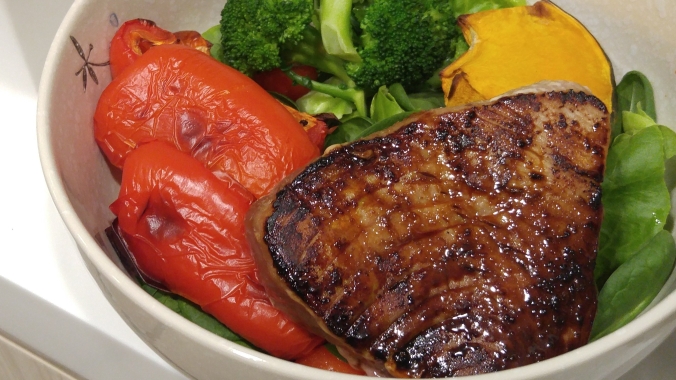 This was one of those days where time was of the essence but I still wanted to make a nice, substantial dinner for him. But really, this was just a sexy salad topped with an even sexier tuna steak! 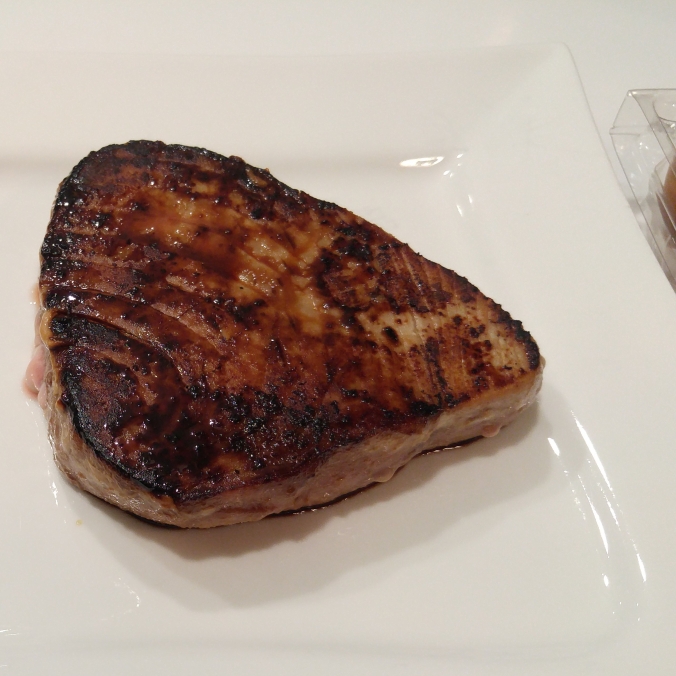 Tuna Steak for One 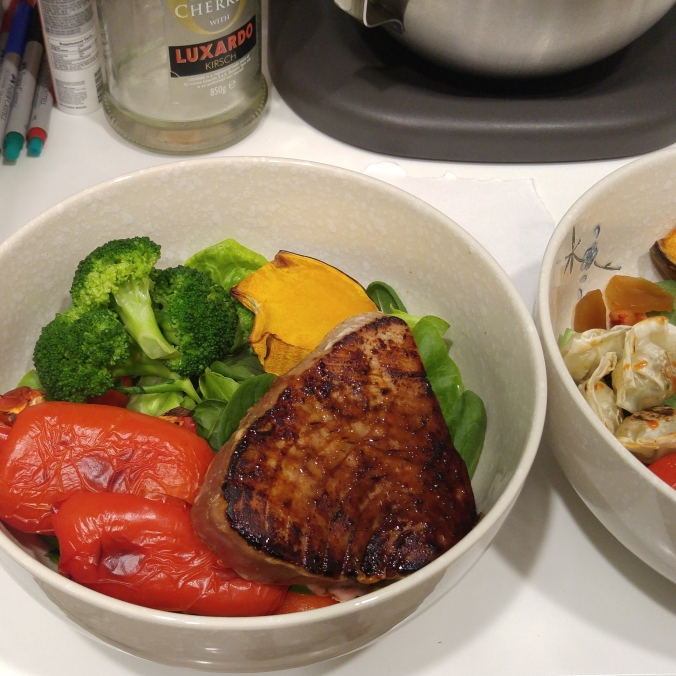 Lots of spinach, cherry tomatoes, roast peppers, broccoli and half a pumpkin wedge. It’s a whole lot of greens with a sumptuous protein to match. Whatever you have it with, this tuna steak will be the star for sure. I’m generally not as much of a tuna fan compared to Flo but the shiny glaze and the bite I stole may have moved it higher up the ranks in the battle of Fish in my books!