It’s been a while since Flo and I went on a nice dinner date together especially with all his travelling the last month. He’ll be grounded for quite a while now, at least until December when we go to Bangkok and Krabi for our last holiday of 2017.

Flo booked a dinner reservation for us at Meta Restaurant, a one-Michelin star establishment along Keong Saik Road. The kitchen is helmed by Chef Sun who churns out French-inspired food with an Asian twist. The restaurant looks modern with its shiny surfaces and mirrors aplenty that made their dim lighting appear brighter. There was a bar counter for those who enjoy watching the chefs work their magic in the open kitchen, but Flo and I chose a table in a quiet corner. I liked that even though the ambience was somewhat laid-back and unpretentious, the dark interior colours created a feeling of privacy and intimacy.

This was a Tapioca Chip with Seaweed Powder, topped with Ikura Roe, Octopus, and Pickled Rhubarb. 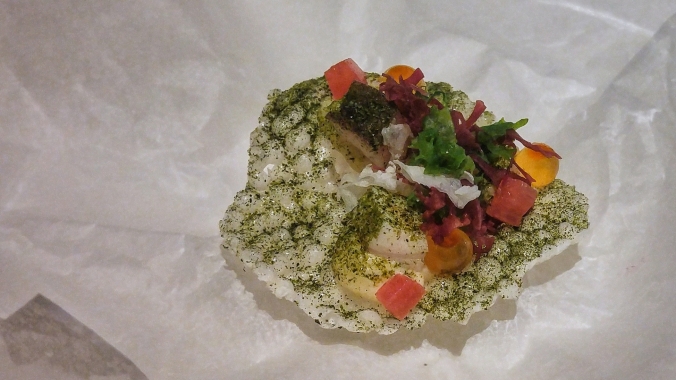 Just as well I was with my Flo because I didn’t have to be dainty with my food. I popped the entire chip straight into my mouth and the initial crunch of the chip gave way to a burst of ikura and chewiness of the octopus. I was taken straight to the ocean as the seaweed flavours emerged only to be held back by the slight acidity of the rhubarb. Good start.

The next set of snacks were the Foie Gras and Fig Tart, along with Beef Tartare topped with Shredded Daikon. 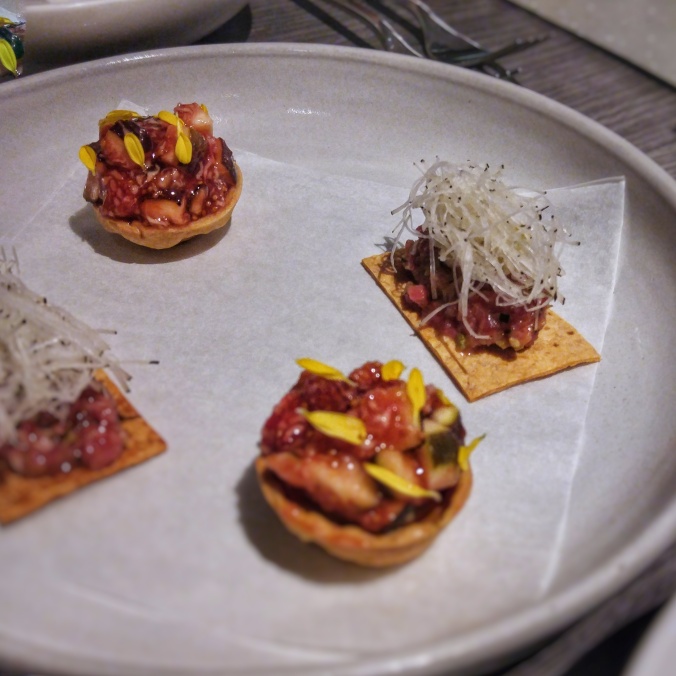 First, the tart. I wasn’t expecting much from it so it was a no-brainer to eat it first. But OMG. After the thin shortcrust tart shattered in my mouth with little effort, it gave way to a lusciously creamy filling that tasted more of blue cheese to me and was beautifully offset by the sweet, juicy diced figs. I was blown away and hardly being a fan of foie gras, this tart shut me up and ended up being one of my favourites of our meal.

The thin crisp that held the beef tartare was delightful as well. The tartare had a definitely Asian flavour to it that reminded me of the beef in gyu don – a little sweet, a little savoury, a little sharpness from the daikon, a little fragrance from some sesame oil perhaps?

With snacks in our bellies, dinner commenced beginning with the Shime Aji with Chilli, Shiso and Pickled Radish. 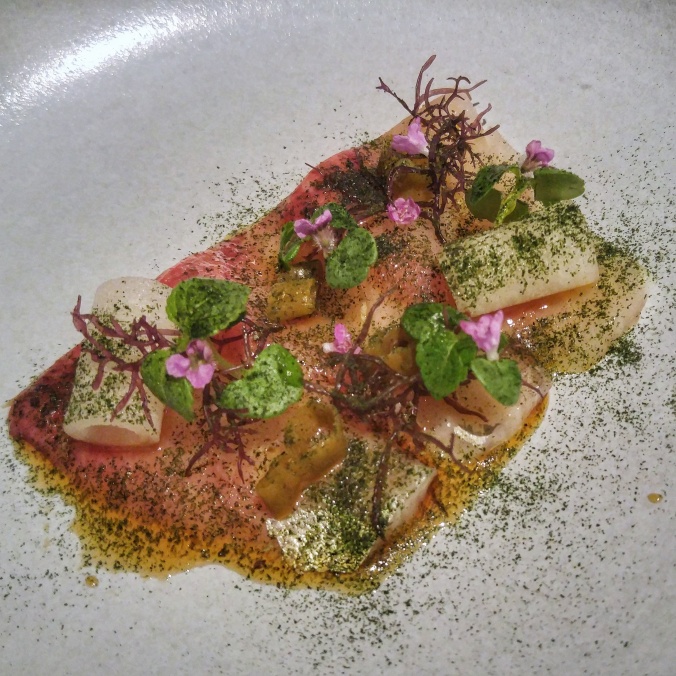 This had a definite play on textures and flavours – crunchy pickles and seaweed gave way to smooth, silky fish. The herbaceousness of the shiso leaves balanced out the hints of chilli spice and greens of the seaweed while transporting you to Japan. I liked that this dish was light on the palate and refreshing as a start to the rest of the dinner menu.

We were presented with the next course of Butternut Squash, Prawn, Kafir Lime and Corn. I’m an ardent fan of pumpkins and butternut squash so this was right up my alley. Throw in the prawn and hearts were in my eyes even before the fork met my lips. 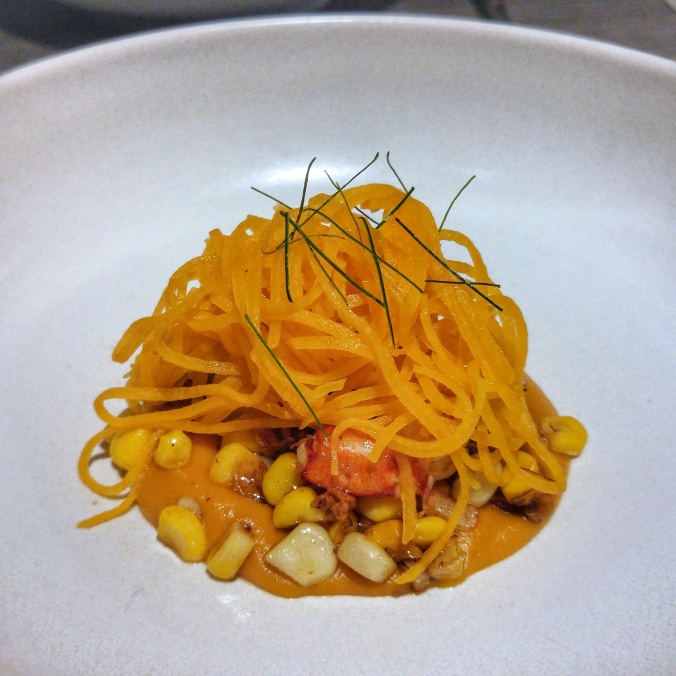 The sweet, creamy puree juxtaposed against the bursts of juicy corn kernels. A bite into the prawn and all I could taste was the natural crustacean flavours multiplied ten-fold. The sharp citrus of the lime leaves rounded this dish and brought it right back to Asia. My only qualm was that the sweetness level very nearly reached the point of being cloying.

BBQ Pigeon came next and was served with Pancetta, Turnip and Ice Plant, with an elegant splodge of butternut squash puree. 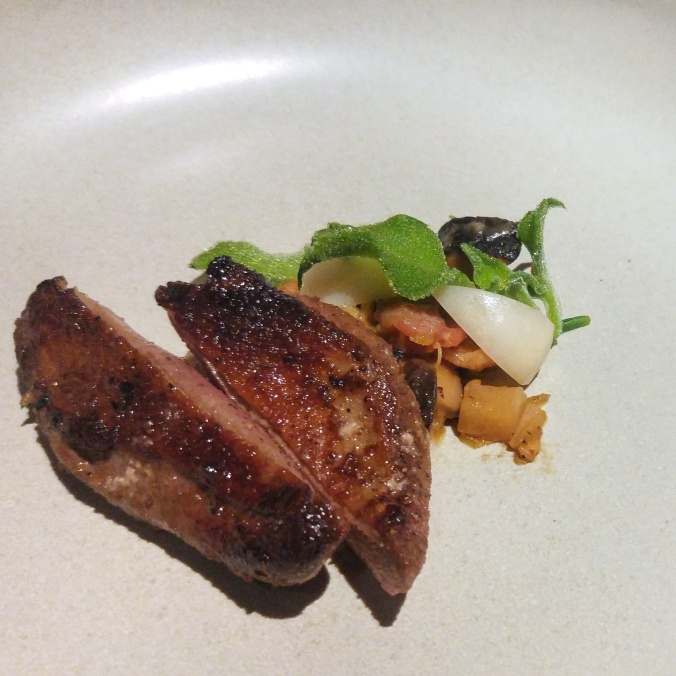 The smokiness of the bird was quite delightful and played off nicely against the puree. The pigeon was cooked pink and yielded easily to the slight pressure of my knife. It was smooth to the tongue and slightly gamey in taste. The pancetta further highlighted the wonderful smoke of this dish as a whole while the crisp clean flavours of the ice plant mellowed out the robust flavours of the meat.

I was getting a little full at this point to be honest so it was apt that they let us have a bigger pause before the Lamb arrived. 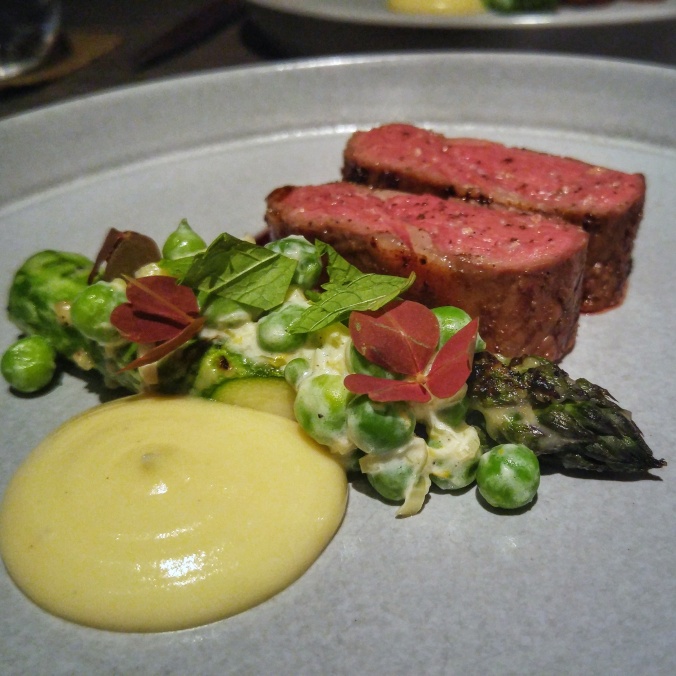 Flo exclaimed that this was the best lamb loin he’s ever eaten. Now, I’m not much of a lamb person but I’ll have to concur with him on this one. The meat retained it’s gorgeous hue of pink and was incredibly juicy and tender. It was however, a little too ‘meaty’ for me and Flo managed to get an extra half piece of lamb from me, much to his delight.

The potato puree was creamy and silky, savoury and earthy, to the grassy freshness of the grilled sprears of asparagus and pops of fresh petit pois. Ooh the greens were just lovely!

Dessert came in shades of black and white. We were presented with a slice of Charcoal Chocolate Cake, a quenelle of Walnut Ice-cream, Chocolate ‘Soil’, with a Semi-Dried piece of Persimmon hidden under. 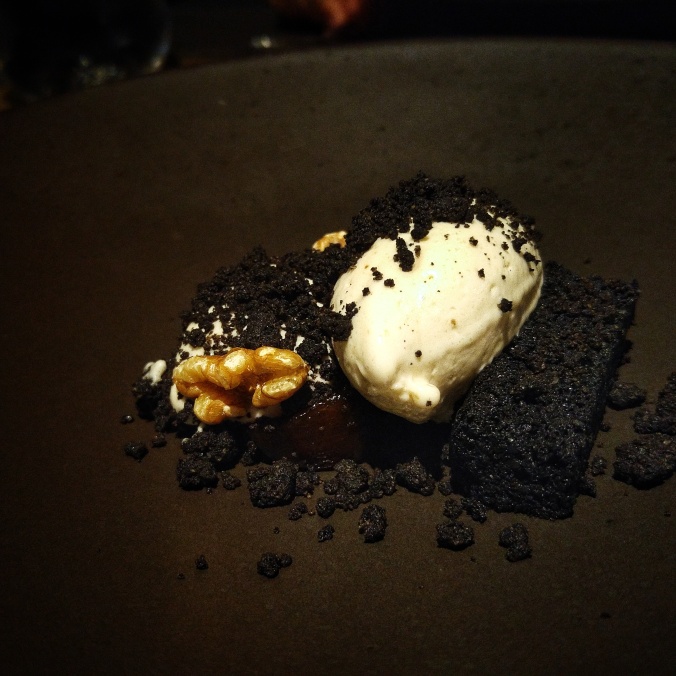 I love me some nuts so that Walnut Ice-cream, with it’s hues of toasty, nutty flavours certainly pleased my palate. I liked that they also toasted fresh walnuts as crunching into them gave way to the heightened pleasure of sweet bitterness. It was an interesting combination of ice-cream with the soft, sticky persimmon and light chocolate cake but it felt lacking. It was a good-ish dessert but not a great one in my opinion.

Flo’s 7 course dinner included a dish consisting of Korean Abalone, Porridge, Century Egg and Seafood – a comfort food for many of us Asians but a little stranger to the palates of those from Europe. He also had an extra sweet dish of Green Apple, Calvados, Fennel and Parmesan which we both felt was the better executed of the two desserts.

We were treated to a trio of petit-fours after we’d packed away our various courses. It was no easy task but yes, we somehow managed to find extra room in our stomachs for these final three bites. 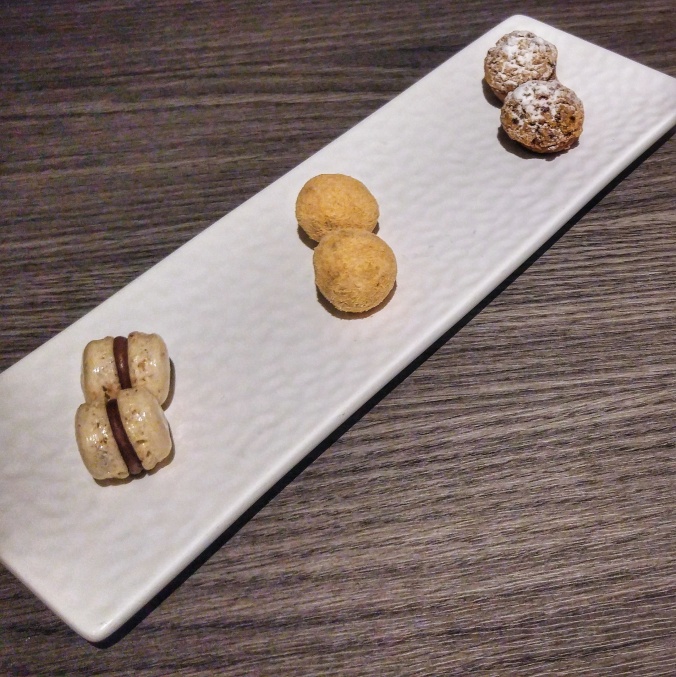 We had some Mini Macarons, Dark Chocolate Truffles coated in Kinako Powder, and Coffee Cream-filled Choux Puffs. The macarons were a little lacklustre; the truffles were rich, deep, and dark and left me a little unsure as to whether the kinako powder was really necessary; the choux puffs were bite-sized balls of light, indulgent delights with the thin shattering of crispness on top giving way to a luxuriously smooth cream flavoured with coffee. Eat these in the right order and you’ll end on a high!

Dinner at Meta felt like a journey with each dish taking us to Europe and rounding right back to Asia. The thoughtfulness that went into balancing textures along with flavours were heartfelt although I felt that some dishes veered towards being a bit too sweet for my preference. I also thought that the menu was quite heavy on the meats so for smaller eaters, perhaps the 3-course lunch menu will suffice.

That being said, it is obvious how much care and precision Chef Sun has put into developing and plating up his dishes. Considering that Meta has been awarded a Michelin star, they continue to work with a humbleness that is endearing, and the affordable pricing for the high quality of food easily makes it a restaurant that you’ll want to visit over and over again especially as their menu changes with the seasons. More than that, it is yet another place that I will have etched in my memory for the simple reason that I had the pleasure of sharing this dining experience with Flo. After all, as much as we enjoy good food, the great company always makes it that much better!