A couple weeks back, before I made my solo getaway to Hong Kong, I shared in a random post about my first time trying a Poke Bowl from Aloha Poke even though I’ve blindly tried my hand at making one before.

After finding all sorts of deliciousness in that bowl of greens, sushi brown rice, pineapple chunks, pomegranate seeds, cherry tomatoes, jalepeños and marinated salmon, I decided to make my own bowl for Flo’s and my dinner one evening figuring that it might prove to be a little painful on our wallets.

I even made him a little chit although he didn’t get to tick any of the boxes since I already had the ingredients at hand so really it was just created for a bit of fun. I ticked all the boxes before he even arrived home. It would have been pretty cool to allow him to create his own bowl but then there’d only be one, two, or three options available depending on the category and my chit wouldn’t have looked as elaborate. 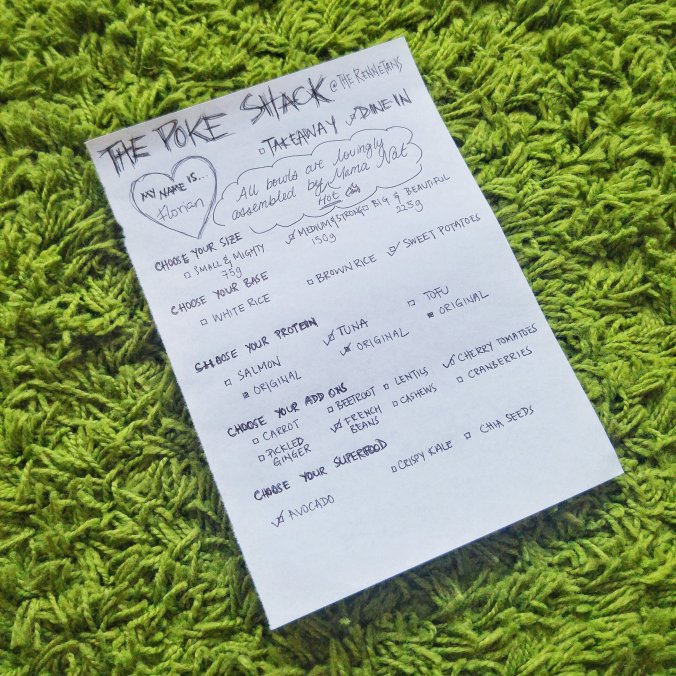 As you can see, it was a bowl consisting of marinated tuna, sweet potato wedges, cherry tomatoes, french beans, some wakame, and smashed avocado, all on a bed of baby spinach. I managed to include some pineapple chunks as well since we had some fresh pineapple sitting in our chiller and honestly, all it takes is pineapple to awaken the Hawaiian in the poke bowl.

There’s so many ways to marinate your fish and so many things you can throw on top to make it more tropical, or more Oriental in flavour. A bit of wasabi, a hint of srirachi, a splash of teriyaki, a shmear of gochujang and you may be transported into a wholly different world. You can top it with kimchi, pickled onions, fresh corn kernels, edamame and sprinkle some furikake on top.

You can use other types of seafood such as scallops or prawns. You can make it vegan and use tofu, or I’ve seen some people use watermelon as well. Although yes yes, traditionally it is Ahi Tuna but hey, food is constantly evolving to suit the tastebuds of the world! The poke bowl is your oyster! In fact, it’s like what everyone’s calling Buddha Bowl (which is funny to me because if you’re referencing the Laughing Buddha, he has a big pot belly), or the Green Goddess Bowl, only this has marinated fish on top.

Anyway, this recipe that I’ve shared is only for the tuna poke that I made for Flo and I the other day. It’s simple and can be made with your eyes half-closed. There’s zero cooking involved but so much wholesome yumminess that it’d be the perfect dish to show off to friends and family for a light, refreshing meal. Include some white or brown rice, or quinoa or couscous, or sweet potato or cauliflower mash – whatever floats your boat, for a heavier meal.

To be honest, I don’t really weigh out all the sauces for the marinade. Most of the time it’s a dash of this and a splash of that. You can adjust the flavour of the marinade to your liking. I’d love to try some other flavours another time – perhaps a poke bowl with a Cajun spin? Or Korean perhaps? Hmm… Still, I have to admit that ordering from Poke shops around Singapore is sometimes that bit more convenient especially when you have a sudden attack of poke cravings. It’s not about being lazy ok?! It’s about… finding inspiration from other sources! Lol.

Happy Poke-ing for now people. I promise you, this is awesome especially when it’s hot outdoors. And it’s always hot in Singapore! Except when it’s not.