I met Flo for my ‘surprise’ lunch that he had made a reservation for. I had a little inkling as to where we were going to go but wasn’t entirely certain. We met at City Hall station and headed towards Carlton Hotel. There I guessed we were going for Japanese. Then I narrowed it down to Shinji. I was right!!!!

The restaurant only opens at 12pm on the dot so since we were a couple minutes early, I took some wefies of me and my beau.

Shinji is actually an extension of Chef Shinji Kanesaka’s 1-Michelin Star Edo-style sushi restaurant in Tokyo. Only omakase menus are offered to ensure that the freshest, seasonal produce are served at their highest quality. Of course, I expected great things, especially since Flo had visited before and always gushed about how great the food at Shinji is.

We both opted for the smallest Setsugetsuka Sushi Course Menu – Hana, which consisted of 9 pieces of Nigiri Sushi, one dish of Maki, Soup and a Dessert. I was a little apprehensive about how much rice I’d have to consume, but overall, I was excited.

We were seated around a 17-seat counter where we could see the sushi chefs at work as they deftly sliced through lovely fillets of raw fish, moulded sushi rice into small mounds, and carefully wiped their benches and our serving plates after each course. It was a clinical operation that flowed so artfully.

The prelude to our Hana Set began with Seared Maguro. This was light on the palate and the subtle smokiness from the sear highlighted the cleanness of the tuna.

Moving on to the Nigiris, we were first served Hamachi (Yellowtail). I’ve always heard, but never tried, that proper nigiri should be eaten with warm rice. It was the perfect mouthful – the grains of sushi rice were lightly packed yet still held well together, warm and pleasing to the tongue and topped with a beautiful slice of the delicate-flavoured fish.

The Ika Nigiri was the next to grace our palate. Never have I ever had a slice of squid so soft and so creamy before. It was a delightful surprise and surely not one that I will easily find elsewhere at this level. It was served with a hint of wasabi and a single drop of freshly squeezed lime juice that brought the entire piece of nigiri to life.

So Flo actually knows that I’m generally not so much a tuna fan than a salmon fan. When Chef asked if we had any dislikes, we both said we didn’t. Thank God for that! Our lunch ended up comprising of a fair number of tuna courses and I’m glad I didn’t dismiss the tuna so quickly because I ended up developing quite a fondness for it.

I’ve only bothered to have Maguro tuna which is the leanest cut. Hence, it was my first time eating Chutoro, which is semi-fatty tuna. It was definitely a step up from Maguro in terms of its soft, luxe texture. But then…

Ōtoro made its appearance and lordy Lord! This was even more luxurious than the Chutoro since it comes from the fatty part of the tuna. See how handsomely marbled this slice of ōtoro is? This practically melted in my mouth and disappeared far too quickly, as with all wonderful things.

Our trio of tuna made way for the Aji (Horse Mackerel) Nigiri which was topped with a chiffonade of aromatic Shiso. The tiniest, pea sized dollop of herbaceousness served to accentuate the sweet freshness of the fish 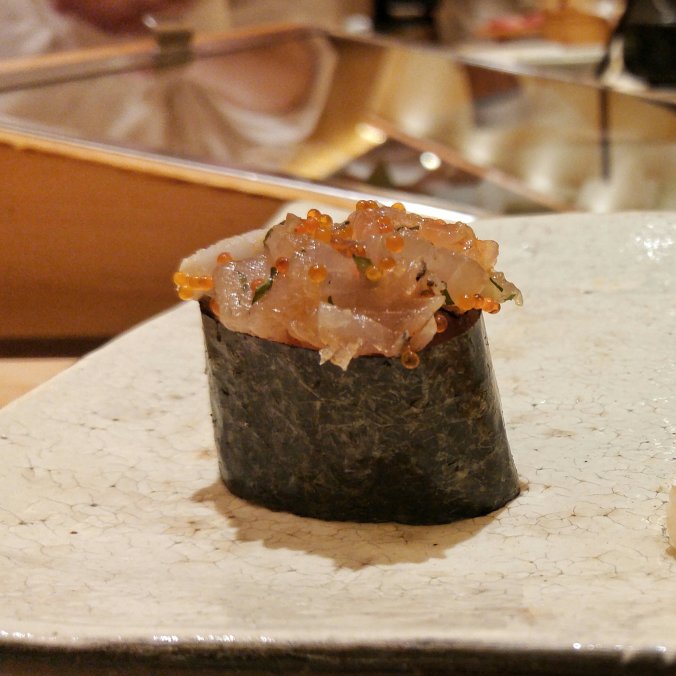 I quite enjoyed this Flying Fish with Tobiko Gunkan Maki. I loved the tiny bursts of the tobiko with inflections of shiso against the still-crisp seaweed, and soft, yielding sliced fish that gave for a balanced textural contrast in this mouthful of yum. 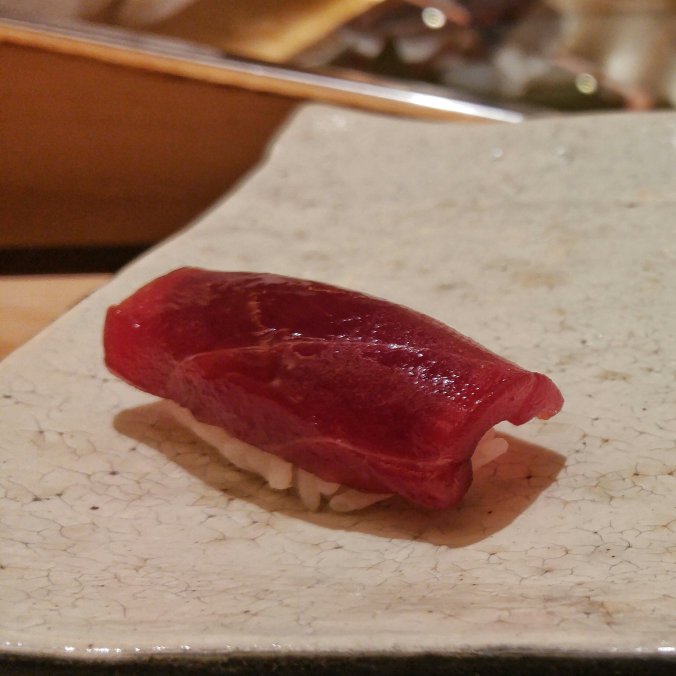 The Maguro-Zuke, shoyu-marinated tuna, was nicely executed – not too salty and perfectly complemented by the seasoned rice beneath.

I love me my prawns and this Tiger Prawn Nigiri was deliciously sweet, thoughtfully cut into two pieces because I’m a lady and couldn’t possibly fit the entire prawn into my mouth. #thatswhatshesaid 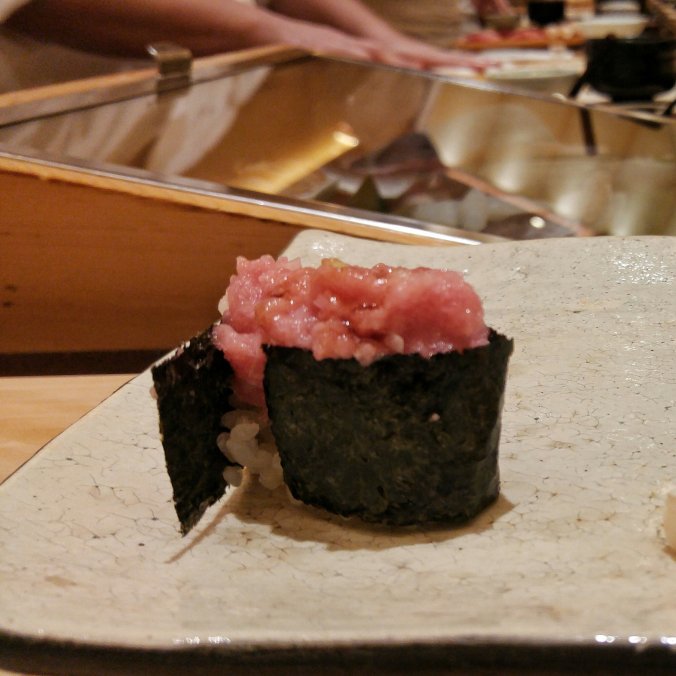 Now, this. THIS turned out to be my favourite of the lot! This Negitoro was sublime! As soon as the last of it slid down my throat, I turned to Flo and said “I think I’ve just had an epiphany!”. It was just so amazingly creamy with its richness cut by the presence of very finely chopped Asatsuki Chives.

Our final piece of Nigiri was the Anago (Sea Eel). Unlike the unagi which is often served slathered in sweet teriyaki sauce, this was a lot more toned down with a swift brush of sweet soy glaze. It was topped with sudachi zest which gave a slightly bitter tang against the salty-sweet of the eel. 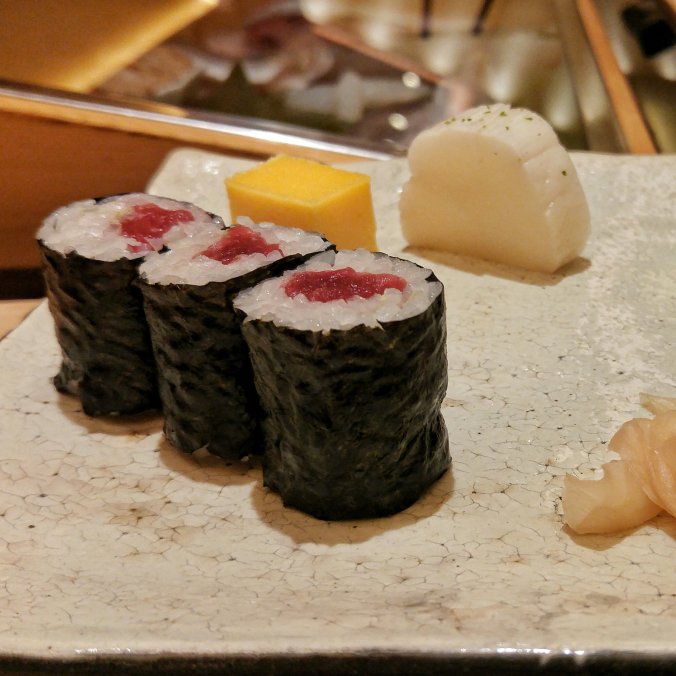 After the excitement and dynamism of the nigiri courses, the tune of our meal mellowed down to present to us the humble Maguro Tuna Maki, with sweet, crunchy, Pickled Radish, and the most custardy, lightly sweetened piece of Tamago I have ever had.

To wash everything down, we were served a bowl of this clear broth made from boiling tuna bones. It was light, yet rich in flavour, and boasted an incredibly fluffy, delicate, almost falling-apart-in-your-mouth tuna ball. 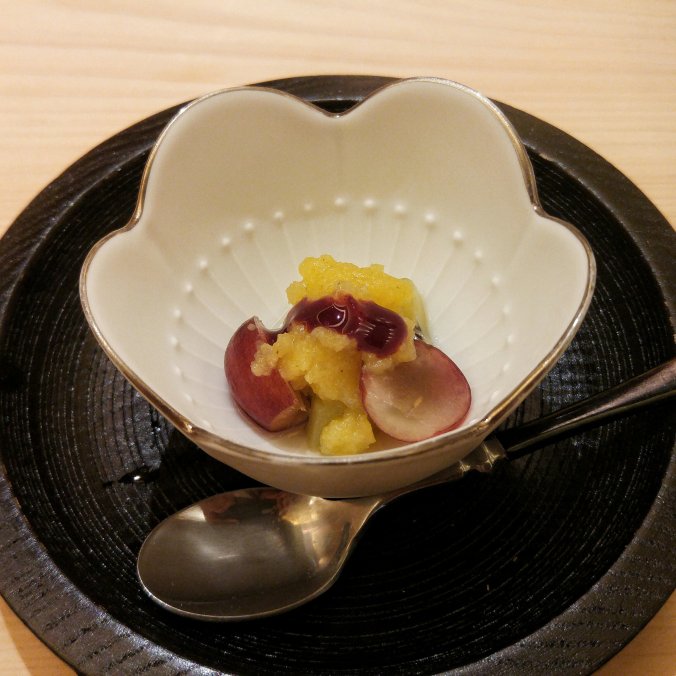 Our meal ended with a light, refreshing dessert of Orange Jelly with Kiwi and Grapes, topped with a Raspberry Red Wine Sauce. In all its simplicity, I appreciated how it came to be the perfect two-bite dessert to see us off. As with our entire lunch, it was unpretentious yet bold in highlighting the quality of ingredients used. Like a ballet performance, this sweet was like a graceful bow signalling that the finale had come to a close.

Needless to say, this was one of the best Japanese meals I have had. My tastebuds have been thoroughly spoilt and it’s certainly going to be no easy feat to surpass the level at which the food at Shinji was prepared and served. Sushi – so seemingly simple to make, but so great a skill is required in order to compose it into a singular, perfect, mouthful. The impeccable service and constant replacements of our cups of hot green tea ensured that our meal from beginning to end went without a hitch.

Thank you Flo, for yet another wonderful culinary experience with you. And because it was with you, lunch was that extra bit more delicious and memorable!