It must have been the weather and the sun, but I felt so happy being in Hamburg. I think it’s one thing to go about doing touristy things in a city/country, and it’s another be immersed into another culture by being with locals. I love discovering new places as a tourist, but being part of German life even for a week, made me feel more connected to the country.

On the Friday that I was there, Flo had some errands to run. So he dropped me off at Cafe May where I was hankering after yoghurt for breakfast. Alas, they only had yoghurt available for their buffet breakfast so I settled for a Sesambrötchen with Nutella and Sour Cherry Compote for €3.60. It came with coffee. 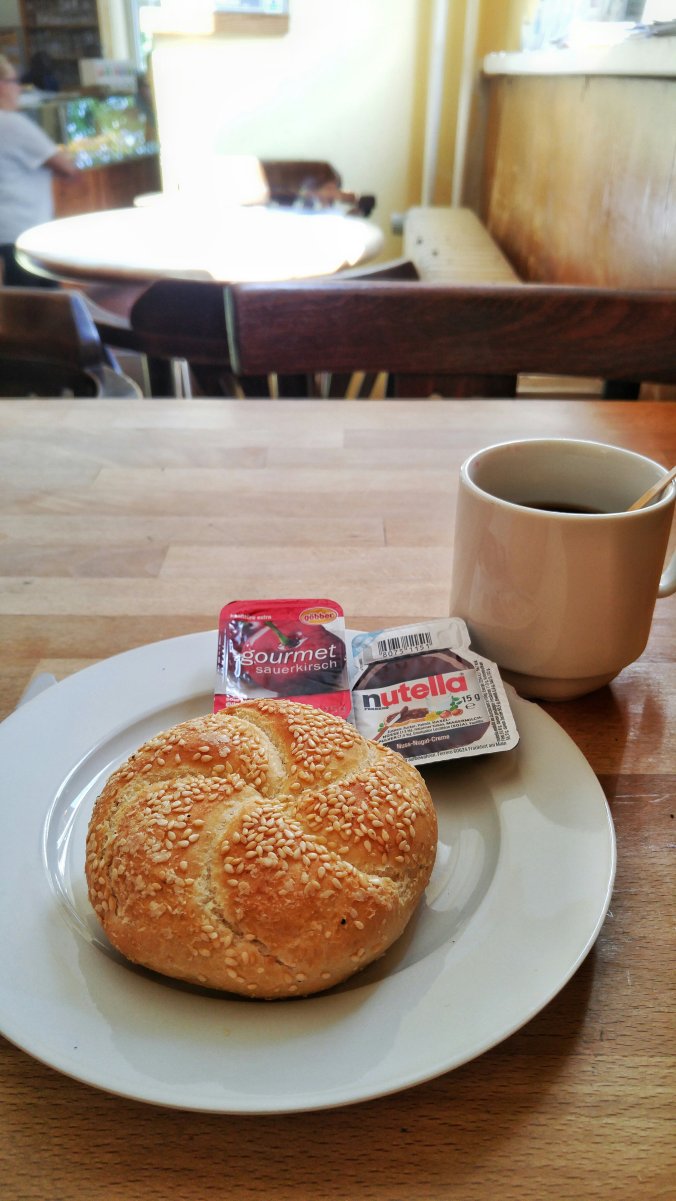 I know it’s a little silly but this seemingly plain breakfast tasted so good. I swear the air in Europe makes food taste better. Or perhaps it’s the quality of flour that makes their bread taste so much richer, more aromatic, more hearty. And yes, we get Nutella here but the Sour Cherries compote was something different. It was delightful! Sweet, but not too sweet. Tart, but not too tart.

Just before I took the picture above, the place was buzzing with people grabbing a quick breakfast before dashing off to work or school. There was a homeliness about the cafe and their large, rustic cakes looked just like the ones grandma would make, filling the air with the sweet scent of fresh bakes. Uhm.. by grandma I mean the kind of grandma who spends her days making magic in the kitchen, patiently coating layers of sponge with light lashings of cream. My grandma bakes too but more Asian cakes – Pandan chiffon cakes and butter cakes. Less of the cream ones.

After a leisurely breakfast, I crossed over to the park that was abound with parents watching their children having the time of their lives. It was a really big park by Singapore standards and it was so peaceful as I made my way further in. I tried not to wander too far or make too many turns lest I got lost. I’m quite prone to getting lost and without wifi or data, that wouldn’t have been ideal.

I found a bench where I sat myself on to bask under the sunshine. Then I got a little restless and decided to walk slowly back to the station. Flo was still settling some stuff so I went over to Penny, this convenience store across the road where I had a good poke around.

Call me a noob but I found these large blocks of Ritter Sport!! They only have the smaller squares here so these looked really novel to me! I restrained myself and didn’t buy any. Just got myself a Coke Zero and a packet of fruit and nut mix in case I got peckish.

I managed to find a small green area where I chilled for a bit before receiving a text from Flo to say he was done and would meet me at the station.

Fun Fact: In Germany, glass bottles, plastic bottles and aluminium cans are often placed beside the bin for the homeless to pick up. They then bring it for recycling where they can get some money back.

I wasn’t sure where to put my finished tin of coke so I put it inside the bin because I was afraid it might get blown away. Not more than 10min later was it fished out by an elderly woman. So I guess I was supposed to leave it beside the bin but no matter, because it was found anyway. 🙂

Our plan for the afternoon was to visit Flo’s aunty Sangeeta and her family. But first. LUNCH!

Apparently, Matjes herring is skinned and filleted before being cured in a marinade. Usually young herrings are used to make matjes herring. Bismarck is lightly salted and pickled while Brathering, it is fried, marinated herring.

The matjes herring reminded me a lot of smoked salmon with saltiness being its most dominant flavour, while the brathering was more plain. My preference is still 100% for the bismarck herring!

We didn’t have too much time to dwell on the brötchens as we were running a little late getting to Sangeeta’s. When we finally reached, it was just about tea time so after introductions were made, we made for their back patio where Sangeeta laid out her stunning Rhabarberkuchen (Rhubarb Cake). 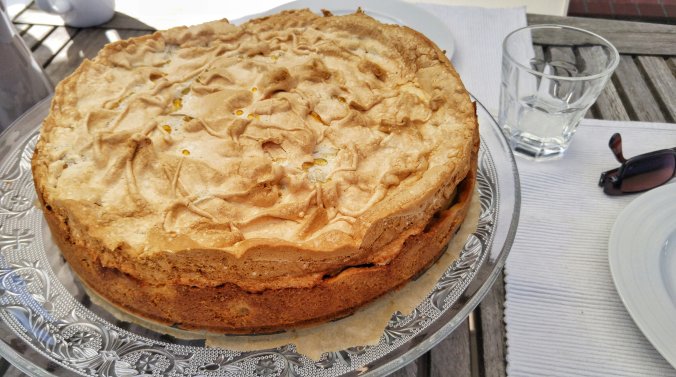 As well as these gorgeous looking Erdbeertörtchen (Strawberry Cakelets). 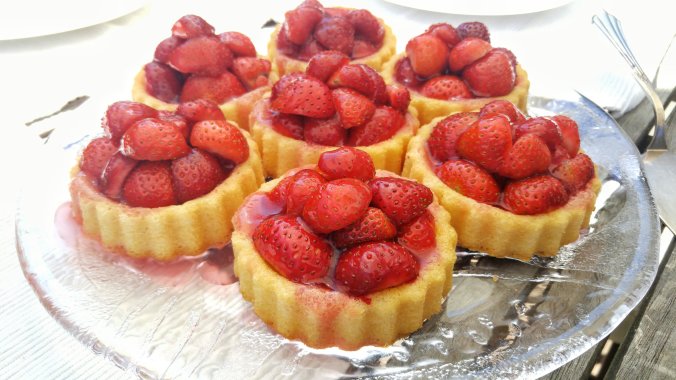 I’ve never tried a rhubarb cake in my life so this was a first. The nutty ground almonds in the cake base held up a generous layer of delicately tangy rhubarb, while the soft meringue on top carried that bit of sweetness needed to balance the flavours off perfectly.

Flo’s 14-years-old and growing cousin, Nilai, managed to down slice after slice of Rhubarb Cake as well as a fair number of Strawberry Cakelets. And he still had room later for dinner. I was in awe!

Flo’s paternal grandma, Frau Mathur, was also present. Bless her! I thought she was amazing and really sweet. As was Flo’s cousin sister Shalin whose attempt to do some social work in Bangalore when her gap year starts in September fell through right at the last minute. I have my fingers and toes crossed that she will get to go with another organisation.

Torsen, Sangeeta’s husband, joined us a little while later in time to get some cake before Nilai polished them off. Then Flo flew his drone around a little while and managed to snap a few pictures of all of us.

I was nice being able to relax on their porch and chit-chat with Flo’s family before dinner. Frau Mathur spent a few years in London working, and that was where she met her husband, Flo’s paternal grandpa, Herr Mathur. Sangeeta and Torsen also lived in the States a few years with their kids so communication with them was a breeze.

Flo’s late paternal grandfather was Indian which also explains the little traces of exoticism in his and his cousins, as well as Sangeeta’s features. They all look so damn gorgeous!! 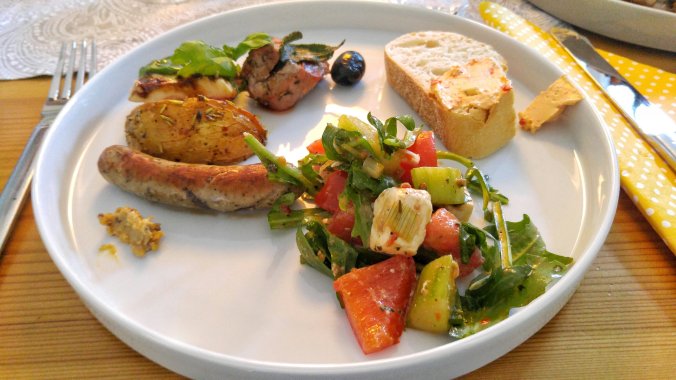 Torsen fired up the barbecue for dinner and the meats! I think I’ve raved so many times to anyone willing to hear that the Germans are awesome at their barbecues. They use good cuts of meat and the sausages are not filled with gristle unlike the ones we get in the UK. They’re proper meat and proper quality.

Sangeeta’s salads were also crazy delicious. I couldn’t help but have a few servings of her salad before daring to ask her what she put into it. Olive oil, balsamic, salt, pepper, sprinkles. Sprinkles of mixed dried herbs. And so, before we left, she gifted me a box of sprinkles for when I make salads at home. I was so touched!

And the plate above ended up having more food piled onto it. I didn’t just eat the one sausage!

Saturday morning was supposed to be our last full day in Hamburg. One of Jens’ friends bunked over the night before because he was testing out a car that his company had lent to him. Mercedes. He woke up so bright and so early that Flo and I were wondering whether he’d already left to drive back to Munich. We found out not long after that he’d actually gone out to pick up some breakfast.

In Germany, you can buy unbaked pretzels frozen and then bake them up at home. Which is what we did. You can’t get any fresher than that! The pretzels were just slightly crisp on the outside and so fluffy on the inside. They were nowhere as dense and bulky as the ones we get in Singapore.

Weisswursts are usually boiled to warm them up, after which you remove their casing and eat the meat with sweet mustard. What I love about these is that the sausage meat is really lean yet so flavourful.

After breakfast, Jens’ friend left for his drive home while we set off to Alster Lake. 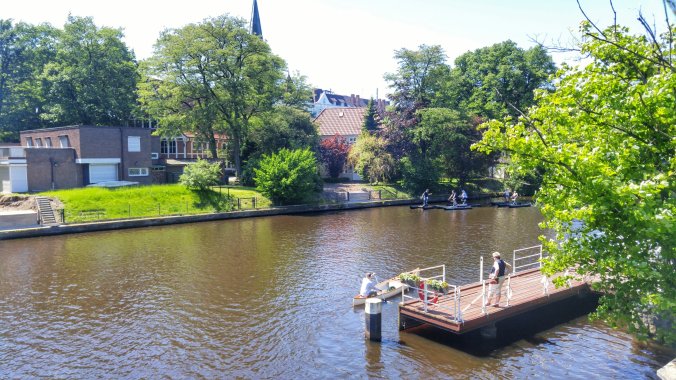 It’s not so apparent in my photos but it was bustling with activity. There were people kayaking, canoeing, paddle boarding, rowing, and even water cycling which was new to me.

Further down where the lake opens up were lots of people windsurfing. I love how the Germans make use of beautiful days to do outdoor activities be it on the water, or simply taking a walk or cycling. It shows how much they appreciate good weather and fresh air.

Finally, a picture with our wonderful hosts, Jens and Leslie. 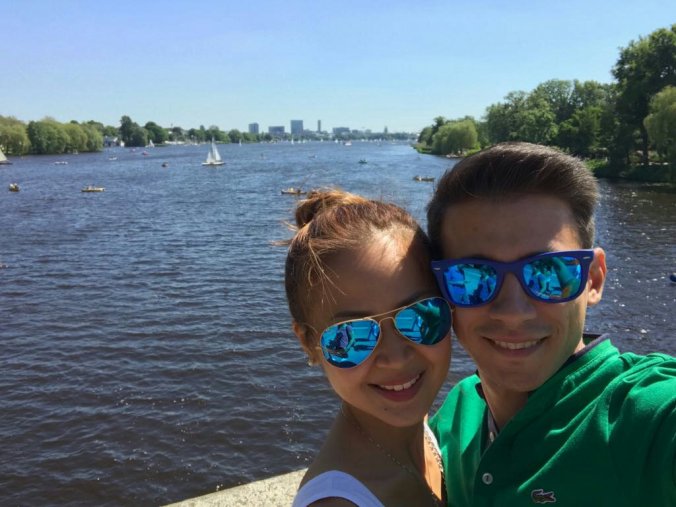 Who managed to put up with the two of us a whole week! 🙂

On our way home, we stopped by their local supermarket to pick up more white asparagus at my request since I don’t think I’ll have any more for quite a while.

White asparagus with ham for starters.

Then we shared the meats that Flo and I failed to bring over to Chris’ place on Thursday. They were still awesome-possum anyway.

We also grilled up some feta cheese sprinkled with dried herbs, salt and pepper, topped with red onions, chopped tomatoes and paprika, and wrapped in foil. Another flavour bomb! I was going to share a picture of it but really, it’s not much of a looker. Trust me though, warm, gooey, melty, salty feta is pure bliss. I actually bought a pack of feta just now! Will wait for Flo to come back and have a BBQ with Amanda and Alex since we plan to swing by Huber’s for some meats. Mmm… I’m already salivating just thinking of it.

Our evening ended on a high because Flo’s team, Dortmund, beat Frankfurt 2-1 to win the German cup. I was very happy because my boyfriend was ecstatic – Happy boyfriend happy life! Only we couldn’t properly celebrate because Leslie’s a die-hard Frankfurt fan. Oops!