Took one of my longest flights ever – 13 hours to London, then a 2 hour layover before a 1.5 hour flight to Hamburg. All to meet my dear Flo!!

I got off really hungry because I’d eaten dinner before my red-eye flight and when they served food at around 1am SG time, I simply couldn’t stomach any. Then breakfast was a sad, dry omelette with a small lump of spinach and half a grilled tomato. I hardly touched it. Boo!

Oh! Quick side story. So when I arrived in Hamburg, I had to go through the international passport lane and met with a burly German immigration officer. As I walked towards him, he looked so serious that I felt quite intimidated thinking Oh Lord! Is he going to give me trouble? Instead, he ended up being quite a nice guy asking me why I was there and saying that a week in Hamburg’s too short. I told him I was there because my boyfriend was here (And that yes, he’s German) and that I’ll be back.

Thennnn… Walking to the luggage belt to claim my bag (which came second in line!!), I was stopped by this guy who said he’d noticed me back in London but wasn’t sure where I was heading. He said that he just wanted to tell me that he thought I looked beautiful and I was like awww.. thanks! Then he invited me for drinks that night which is when it got a bit awkward because right at that moment, the doors leading out to the public waiting area swung open and there was Flo and Naima waving at me. Lol. I told the guy that I was going to pick up my bag and meet my boyfriend. He got the message very quickly and bid me a quick goodbye. Still, props to him for having the courage to come talk to me.

Now, back to being hungry…

After hugs and kisses, I told Flo I was super hungry and it being Germany, there were quite a few bakeries we could go to within the airport to grab something. I decided to go for a simple yoghurt cup with muesli and fresh fruit. While we were queueing up to pay, I saw these!!:

They were selling giant balls of chocolate with bread rolls called Klatschbrötchen! I think they were what Londoners call Chocolate Marshmallow Tea Cakes – A thin outer covering of Dark Chocolate encasing Marshmallows And a thin Biscuit Base. I think what the Germans do is they then warm them up with the buns and eat them.

We then went off to where Flo and I were putting up for the week – his friends’ Jens and Leslie’s apartment. After a short rest, Flo, Naima and I traipsed over to the community gardens that Flo says is quite typical in Germany.

There were lots of dandelions!! Love love love. And the weather was gorgeous – refreshing cool air with lots of sunshine.

The community gardens are plots of land that people can rent out to do gardening – especially for those who may live in apartments and not have access to their own. Each plot of land is rented for a period of time and can be extended, and they also have their own shed/small house that can be done up and lived in for a few days – a little like a summer house I suppose. 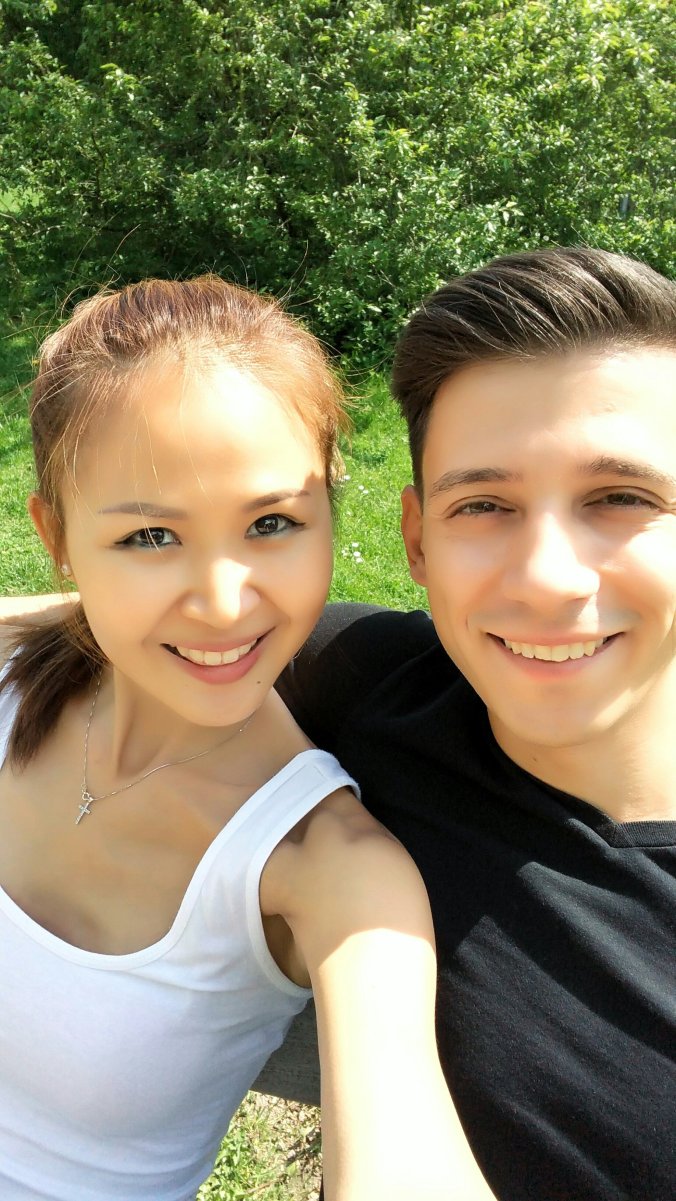 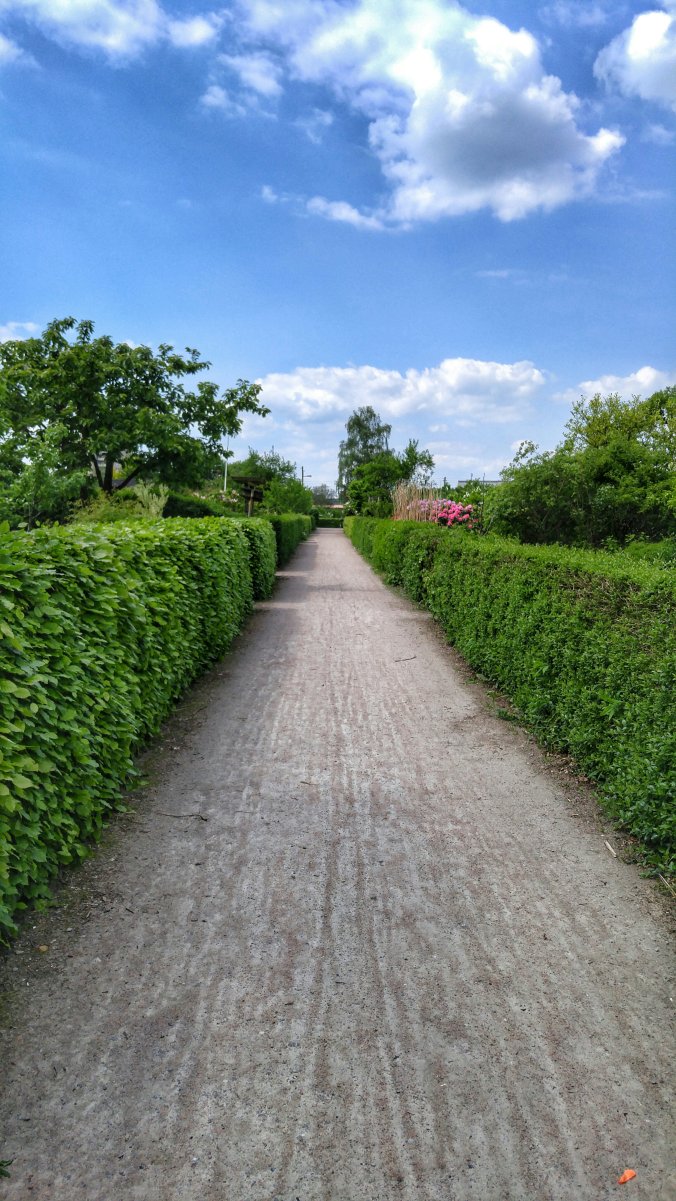 It’s apparent how much the Germans love their gardens and so many of them were tended to beautifully. I enjoyed looking at the flowers that cannot be found so easily here. And of course, there were some gardens filled with interesting paraphernalia. Also, there were some large open spaces here and there where people are able to walk their dogs. 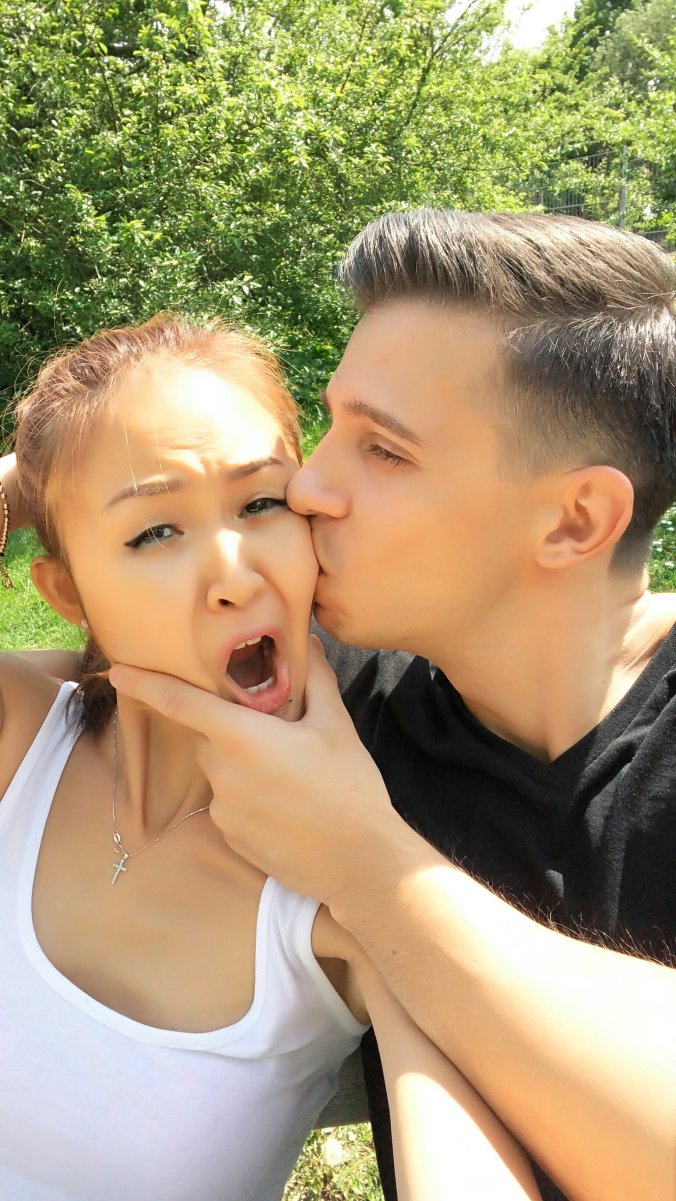 Only a few hours together and already he was ‘bullying’ me.

Naima had a plane to catch the same afternoon so we only had a few hours together. I realise just now as I type that we didn’t take a photo together. On the bright side, we have yet-to-be-concretised plans to meet in Thailand end of the year so I hope that works out!

Flo dropped her off at one of the stations where we also bought some lunch to eat in the car while driving to Lars’ home which is a little out of Hamburg.

Flo introduced me to the Franzbrötchen which is usually more a breakfast bread. It’s really more like a danish but more dense, less flakey, and flavoured with cinnamon sugar although they also have other ones with fruit compote or chocolate.

I think the Cinnamon Sugar Franzbrötchen was really good and not too sweet. Not something I’d have for lunch but maybe for two breakfasts – yes, I thought it was quite hefty to finish off in one sitting. I say that when in fact, I had half of it with Flo, and we also shared this Mixed Grain Brötchen with Pesto, Mozzarella, Fresh Tomatoes, Sun-dried Tomatoes and Salad Leaves. 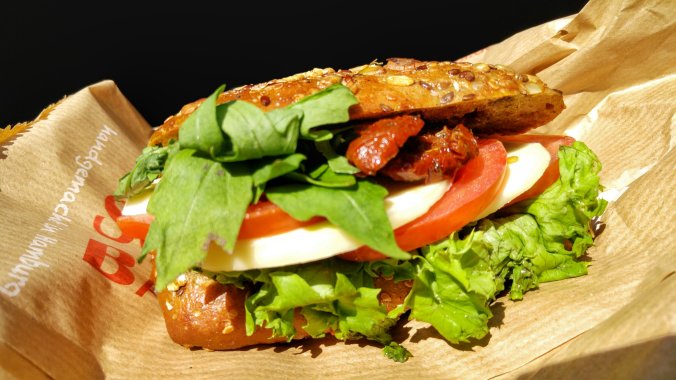 So simple but so fresh and delicious!!

Omnomnom. Definitely going to make this at home!

It took about an hour and a half to reach Lars’ place. Lars is one of Flo’s bestest friends, and his son, Freddy, also happens to be Flo’s god-son. I was quite excited to be meeting Lars and his young family but also apprehensive. I think I was pretty nervous to meet all his family and friends over the course of this trip simply because Flo means a lot to me and obviously I wanted to make a good impression.

Below is a photo of us going through the Elbe Tunnel. 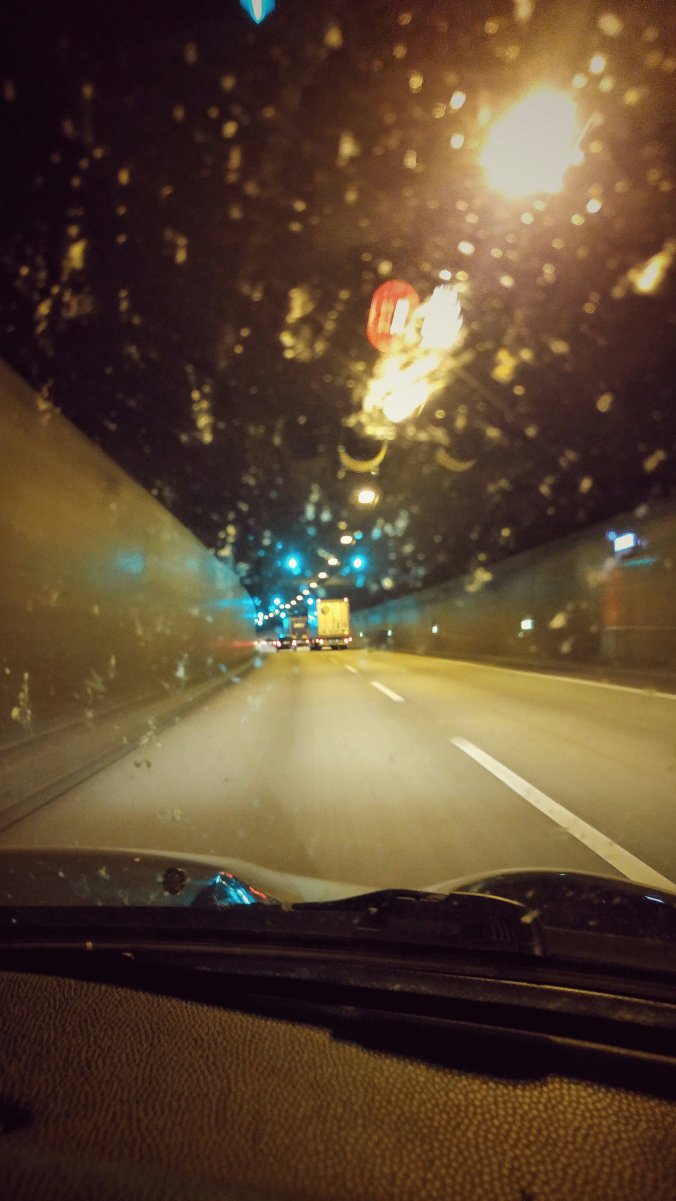 Please excuse the really dirty windscreen. I took this picture because Flo’s maternal grandfather was an engineer back in the day and contributed to the building of this tunnel which lies 24m underwater. It was built to connect central Hamburg to the docks and shipyards that lie on the Southern side of the Elbe River. Pretty awesome huh?! 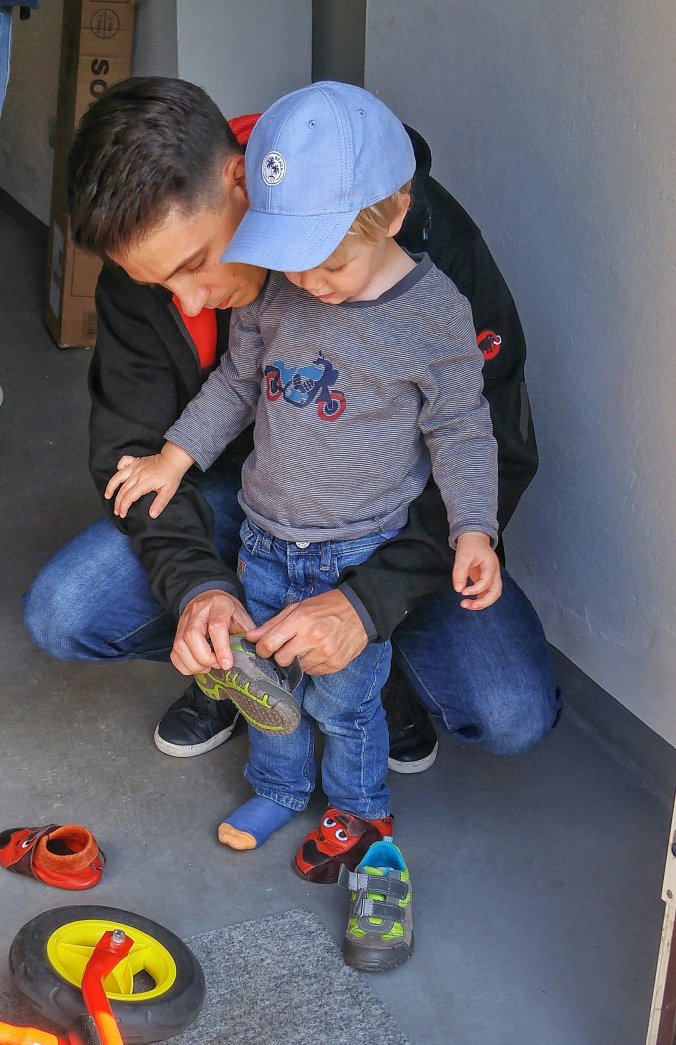 And this picture I think is super sweet – Flo helping Freddy put his shoes on for us to go for a walk. He wasn’t too happy having to leave his Running Bicycle behind but after a couple packets of gummy bears and a trip to the playground, he more or less had it out of mind.

The area that Lars lives in is really quaint with a pretty nice town centre. The place is related to this German tale about a Hare and a Hedgehog so there are a lot of artefacts of hares and hedgehogs around. It’s quite an interesting story but also pretty long. Essentially it’s about how the hedgehog outsmarted the hare and how no matter how quick-witted you think you might be, you should never look down on anyone because they might be smarter than you assume them to be. 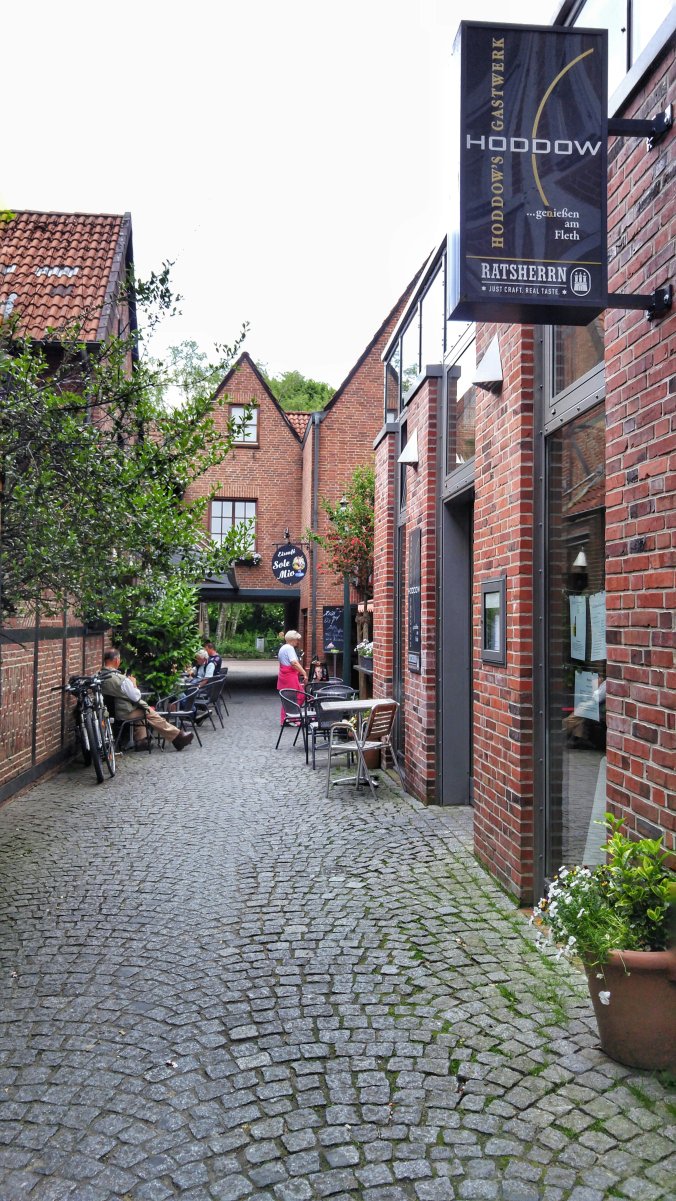 There was also this small little courtyard that had a Gelateria where families kept coming and going to buy their ice-creams and carry on with their day. There were also some elderly folk who were happily indulging in their sundaes. I found this quite amusing because in Singapore, the older generation seldom eat ice-cream, preferring traditional Asian hot desserts, or Ice Kachang on a hot day. 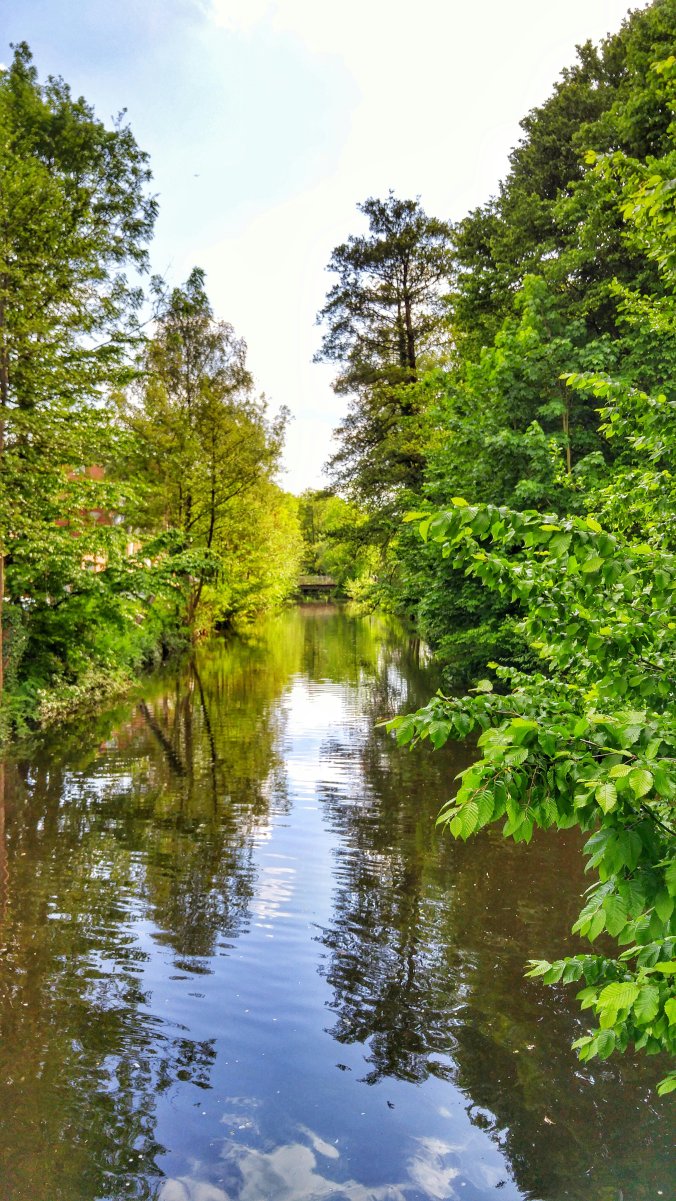 We met up with Lars’ wife, Regina, and their 8-month old baby Jonathan who’s so precious! He seems to be quite an easy baby and it was funny because during dinner, he suddenly gave me this death stare, almost like he wanted to kill me and I was a little shocked. I tried to do a silly face but he just continued staring at me. Then suddenly, his face turned red and Flo and I knew…

We knew he’d done the deed.

And sure enough, moments later when Lars lifted him up to check on his diaper, he went ‘Oof!’ and little Jonathan started grinning away. Totally made Flo and I break into laughter.

We had dinner at the Bürgerhaus which is very much like a pub. Portions were huge!! I was a little jet lagged so I thought to go for something lighter. In this case, the Scampi Salad. 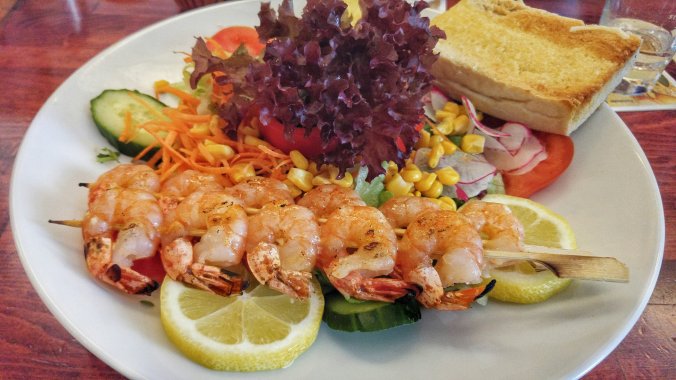 They gave ample salad that I could hardly make a dent into before filling up. The scampi aka prawns were grilled to have a subtle smokiness that I enjoyed.

We parted ways after dinner because the kiddies had to be put to bed. It was already past their bedtime so Freddy was starting to get a bit cranky. I enjoyed meeting Lars and Freddie, Regina and Jonathan. Thankfully most Germans speak pretty good English but I did feel it a bit not being able to speak German especially with Freddy. So it made it a little difficult to play with him the way I would have liked to.

Note to self: Look up German Language Classes in Singapore.

Flo and I stopped by the supermarkets to pick up a few bits and pieces for our breakfast next morning and I spotted 1l bottles of Coke Zero! I’ve never seen 1l bottles of drink in Asia. Usually they go from 500ml and jump to 1.5l.

We also found Coke Zero Cherry. Tried it and it wasn’t too bad although the cherry flavour did taste a touch artificial.

But hey! In a country famous for their Blackforest cakes, it’s no wonder they have cherry cola too! 🙂

It was a wonderful first day in Hamburg and I was really blessed with great weather. Also, it being the cusp of summer meant long hours of daylight which helped me stay awake longer. We returned home to Jens and Leslie whom we spent a couple of hours talking with before turning in. Was quite smashed and fell asleep soon after hitting the mattress. Still, I woke up really early because the sun rose at like, 5am. Then I went to sleep some more because that’s what I do – I wake up early and fall back asleep until I’m really awake. Which is just as well because our plan for Tuesday was to make footprints around Hamburg city.

2 thoughts on “To the Land of Brötchen.”