I understand that being a home baker doesn’t sound like a very difficult job. Essentially, it’s like having a hobby and earning money off of it. The truth is though, while it may seem that I sit around at home doing little else but throw batter into the oven every so often, it can be highly demanding especially when orders come flooding in. And trust me, when it rain, it pours. Similarly, there can be periods of lulls too.

I don’t generally start my day as early as most office people do. I have the luxury of rolling out of bed at 9am, I have the flexibility of going out for tea, I have the ability to fit in supermarket runs to pick up groceries for dinner, I can also find time to clean and tidy up the house while I have cakes baking away. What matters most to me is that by the end of the day, I have my orders ready, or my prep work done for the cakes waiting to get dressed up the next day.

Some days, I start work straight after breakfast, shovel a quick 5-10min lunch into my mouth, and carry on with more work until late afternoon. 4pm, 5pm.. That’s a pretty good time to finish work and clean up. But imagine standing on your feet for 7-8 hours to mix up batter, make frosting, decorate cakes, wash equipment, dry equipment and repeat just so that your other half can come home to a place that looks nowhere near the chaos that was only a couple hours ago.

In a way, I guess I’m like those toys you had as a child, the ones that came to life the minute you shut the door behind you to go to school, wreaking havoc through your bedroom, only to settle back exactly the way they were placed the second your door creaked open. 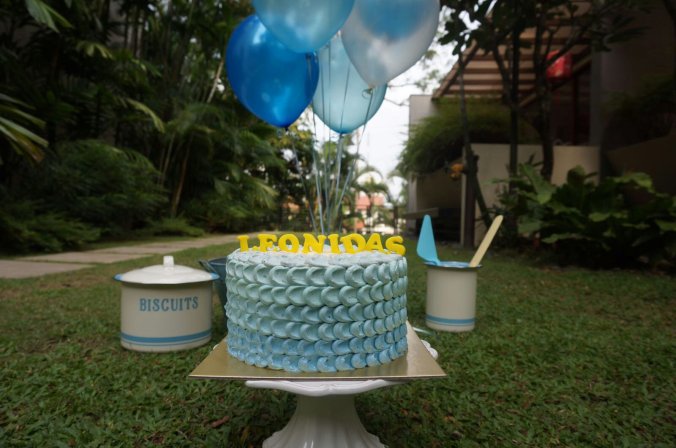 Something that I struggle with sometimes though, is that because I work from home, people generally see what I do as ‘fun’. Of course, I have a lot of friends who are supportive and order cakes for special occasions. Then I have others who expect free bakes from me whenever we meet. I guess I also put it on myself to bake cakes for close friends on their birthdays. The difference though, is that when it is expected of me versus when it is something I choose to do, it makes me feel I’m not being taken seriously as a baker. 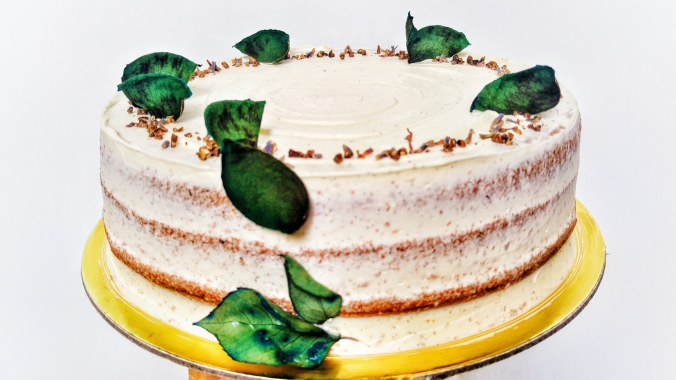 Ingredients cost money. Time costs money. Don’t get me wrong, I love experimenting and creating new baked goods. In doing so, I often have more than Flo and I can eat so I try to distribute them out to friends and family to enjoy and give feedback on. It’s those times when people request for cakes and pastries like I owe it to them that irks and upsets me.

Also, people forget that when we don’t work, we don’t get paid. At the same time, I am a big believer in life experiences so I feel that it’s ok to put money into travel especially, and it’s nice to be able to enjoy a good meal from time to time too.

Falling ill is a big no-no when you are your one and only employee. I remember once when I was crazy ill with UTI (which was symptomless and was initially diagnosed as dengue), feeling faint, aching to the bones and running a temperature that kept returning after the panadol had worn off, I still had to haul myself to the kitchen and bake for my customers. So in a way, there are no off-days and I can’t tell a customer that I can’t bake their child their birthday cake because I’m ill, or that the cake didn’t turn out the way I wanted so I’ll bake it again and deliver it the day after instead. 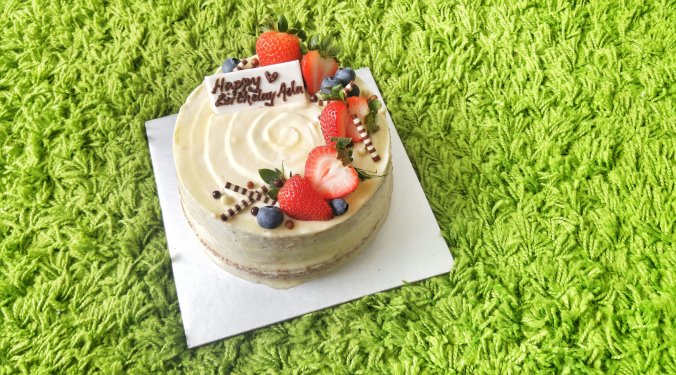 It may seem that being a home baker is a rather stress-free job especially since there’s no one breathing down my neck, no boss to report to. The truth is, I see my customers as ‘bosses’ because my aim with each cake is to be able to meet their expectations, or surpass them even. I want to be able to deliver cakes that not only brings a smile to their faces upon seeing them, but also a warmth to their hearts and stomachs upon eating them.

Just yesterday, I was dealt with a bit of a crisis when I was about to start decorating an apple walnut cake. Upon cutting into it, I realised that my complacency had led me to bake a cake that was not fully cooked. It couldn’t be salvaged and I had a mere three hours to bake a new one, cool it down, whip up a batch of frosting and get it decorated. In fact, factor in the time spent stocking up on fresh ingredients and travelling from home to the delivery place and really, I only had a little more than two hours. 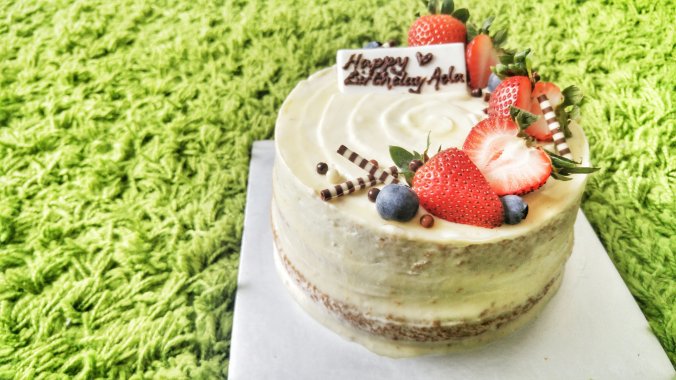 I had to think quick and switch to a different recipe that baked faster and cooled quicker. I used a lighter sponge and quickly grated up two Granny Smiths while the eggs whisked to volumise, crushed some walnuts, and had the cake baking for a good half hour. Said cake is in the two pictures above.

I made a quick lunch to scoff down as it cooled before having to slice up a still-slightly warm cake, make a fresh batch of Honey Mascarpone Cream, and assemble the whole thing before the cream melted in our tropical heat. I left the cake in the fridge to chill for as long as I could before undertaking the mission to deliver it in one piece.

To be honest, I worried that the cake was not baked to the level that I would have liked having been done under a high level of stress and time pressure. But in the evening, Kim, who ordered the cake for her colleague, sent Ada’s feedback to me which read:

“OMG! The cake is sooooooo yummy!!! The flavours go so well together… it’s light without compromising on the complexity of the taste… really very good…”

And that was enough to make my day and remind me of why I do what I love, and love what I do.

Which brings me to this:

I’ve been dabbling in more healthier bakes recently and it’s true that healthier isn’t necessarily less tasty. While I’ve still not gone in the direction of making everything gluten-free or eggless or butter-less, I mean, honestly, butter is gold!, I think that there are ways to adjust recipes to make them that little bit more nutrient-dense. 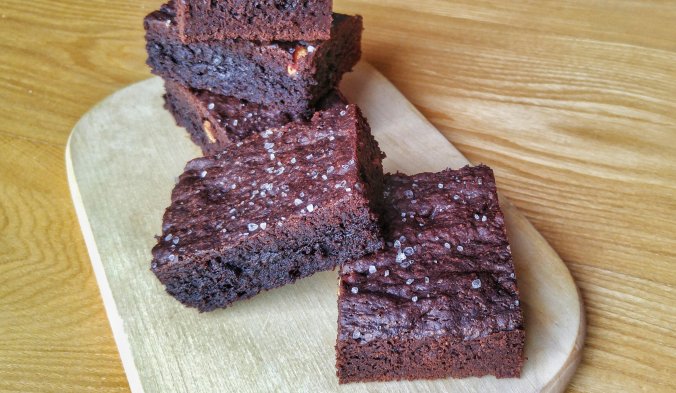 My love affair with blondies and brownies has not ended either. So I married the idea of healthier bakes with brownies to get my latest favourite dense, fudgy brownie that hits the spot with every bite. Yes, I change favourites like I change my undies. But seriously, Dark Chocolate… Roast Almonds… A sprinkle of Maldon Sea Salt… mixed with Rye Flour and Coconut Sugar. What’s not to like? And dark chocolate is apparently full of antioxidants so it’s a health food! 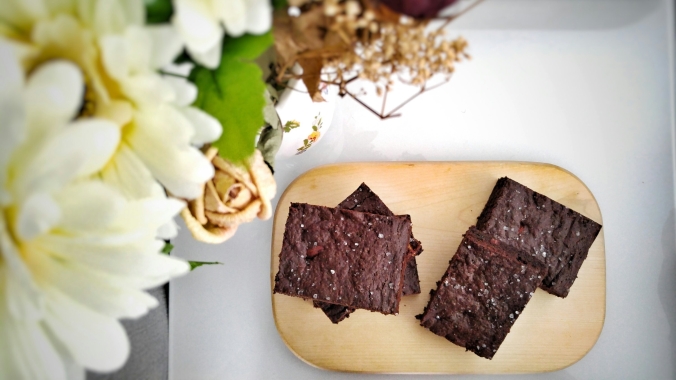 Now before I share my recipe, I’ll have you know that I used a mix of two chocolates because they were on special and I decided to take the lazy route and not toast my own almonds. I used Cadbury’s Old Gold 70% Cocoa Dark Chocolate and Old Gold Dark Chocolate with Roast Almonds. I used them in equal parts and voila! Party in your mouth!! I might bake this again with an even darker chocolate just because I can, but I went for 70% this time because I was being a wuss. 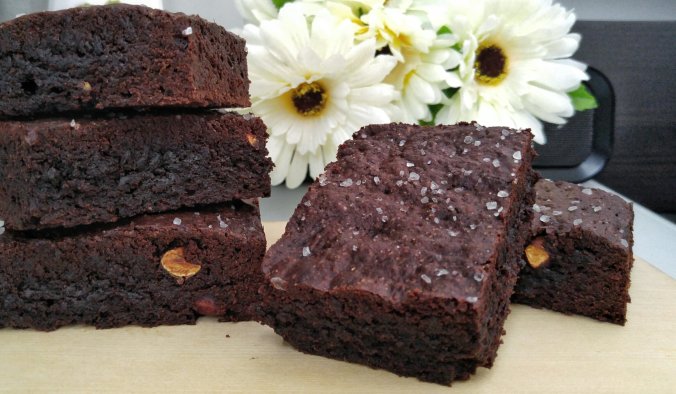 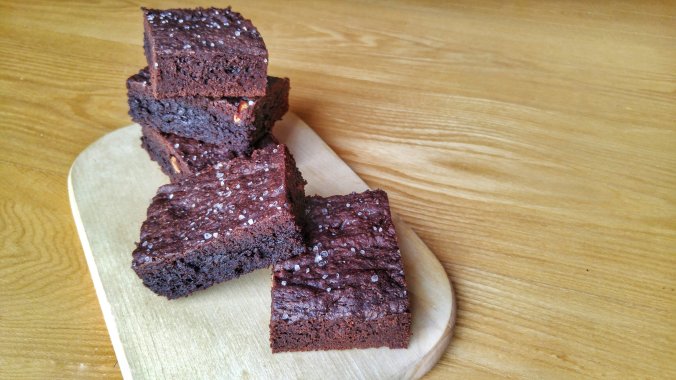 Honestly, the roast almonds were a wonderful nutty, crunchy addition to the brownies so either do what I did and get a bar of your favourite chocolate bar with nuts to use in this recipe, or toast some almonds and throw them in. Insanely yummy and not to mention quite highly nutritious with rye that’s high in fibre, low in GI and rich in iron and magnesium. Still, that’s not to say that you should eat a tray of these brownies in one sitting. Everything in moderation my dears!

Anyway, I’m sure that a lot of people who work from home may, or may not, identify with all that I’ve just shared. Some days, I sit back and wonder if I should just get a straight-laced office job with regular hours and good pay. Most days, I think about how so many (note: not all) friends complain about their cushy jobs that comes with a fat pay check and wonder how happy they are dragging themselves to a job they loathe every single day. The thought of putting myself in their shoes is what constantly strengthens my resolve to continue with what I’m doing – at least for as long as it can sustain me. 🙂

4 thoughts on “Do what you love. Love what you do.”